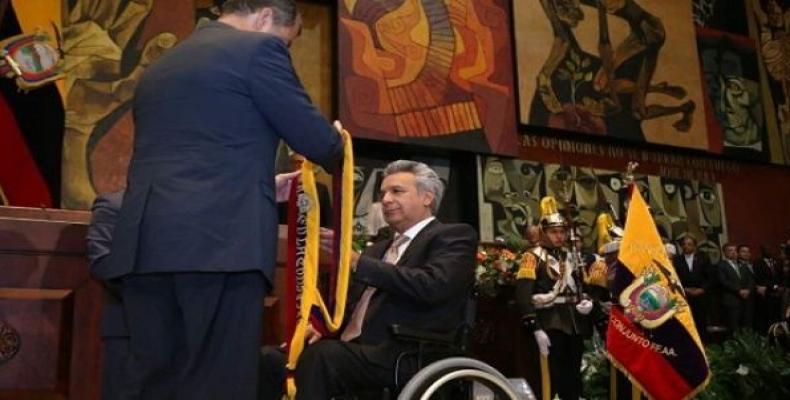 Quito, May 24 (RHC)-- Ecuadorean President Lenin Moreno took the oath of office Wednesday in Quito, as hundreds of invited guests witnessed the event at the National Assembly.  Outgoing President Rafael Correa handed over the reins to the new president, who will continue a decade of social and economic gains known as the Citizens' Revolution.

The ceremonies began with outgoing President Rafael Correa traveling to the Metropolitan Cathedral located in the heart of Quito to present a wreath of flowers at the mausoleum of South American independence leader Mariscal Antonio Jose de Sucre.  This tradition occurs annually on May 24th to pay respect to the heroes of the Battle of Pinchincha, which led to the liberation of Quito from Spanish forces in 1822.

"A phase has ended ... and a new one begins," said Lenin Moreno in his first address after being sworn in as president, noting that the country has seen 10 years of reclaiming sovereignty and pride as a nation.  "No one doubts we have created a different Ecuador and that there is still much to do."