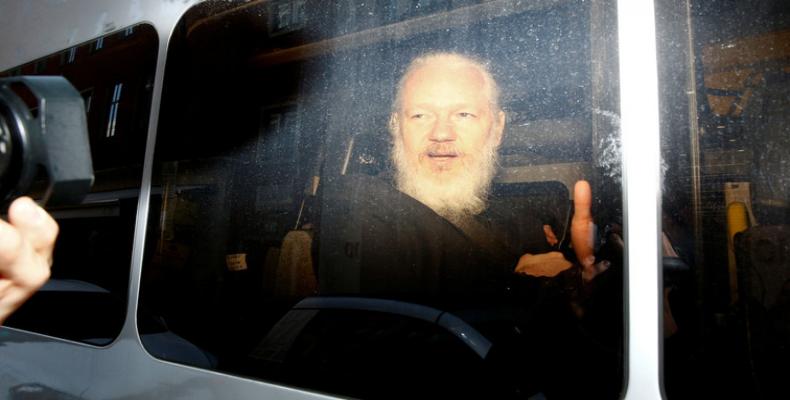 Quito, April 23 (RHC)-- A senior diplomat who worked in the Ecuadorean embassy in London until last summer has denied claims by the country’s government that Julian Assange was evicted from the mission because of his disrespectful behavior, saying the press freedom activist suffered from a government plot to force him out.

Fidel Narvaez told Sky News that the government had created a “hell” for Assange in the embassy, where had stayed for nearly seven years to escape possible extradition to the United States, while officials tried to “break him down” and force him out.

He said claims by Ecuador’s president, Lenin Moreno, who said that his government had ended Assange’s asylum in the embassy because of bad behavior was totally incorrect.

“Julian had a respectful relationship with staff, diplomats and administrative staff. I don't recall a single incident when he disrespected someone until I left in July 2018,” Narvaez said, adding, “He was 100% respectful.  Clean and tidy?  What is clean and tidy?  Did he put the dishes in the dishwasher?  Probably not at weekends.  Is that a crime?”

The comments came after Moreno and other Ecuadorian officials claimed Assange had assaulted guards, didn't clean up after himself, didn't take care of his pet cat and even smeared human excrement on the walls of the embassy.

Narvaez said all those allegations were in fact part of a plot to make life unbearable for Assange and force him out of the embassy.  “The last year was hell for Julian in that embassy ... I was there the first months of the last year and I witnessed when Julian was told that he would no longer be allowed to have Internet or access to the phone and wouldn't be able to have visitors,” he said, adding: “The strategy was very clear -- break him down.  The government didn't know how to end the asylum."

British police officers arrested Assange, the co-founder of withsleblowing website WikiLeaks, inside the Ecuadorian embassy on April 11th.  He is now in custody pending a review of an extradition request from the United States for charges related to leaking of U.S. military documents in 2010.

Many have criticized the arrest, which came after years of constant pressure by Washington, as a gross violation of press freedom, saying it would make it easier for governments to nab journalists simply because they exposed crimes.