On Nakba Day, Iran says Israel is root cause of regional crises 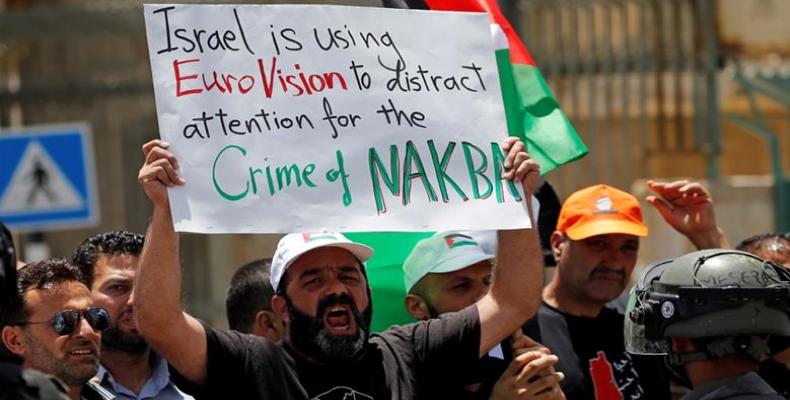 Tehran, May 15 (RHC)-- On the anniversary of the day when the Israeli regime declared its existence 71 years ago, Iran has described Tel Aviv as the root cause of crises in the Middle East and a real threat to world peace.

The Iranian Foreign Ministry released a statement on Tuesday, on the eve of Nakba Day (the Day of the Catastrophe), when back in 1948, hundreds of thousands of Palestinians were forcibly evicted from their homeland and when Tel Aviv proclaimed existence.

“On Nakba Day, an illegitimate entity called the Zionist regime [of Israel] supported by the United States, came into being by occupying the Palestinian land and continued to exist with war, crime and occupation, and has turned into the main source of all regional crises and a real threat to international peace and security.”

The statement expressed Iran’s support for the Palestinian cause, calling on the international community, the United Nations in particular, to shoulder its responsibility to take major steps to end Israeli occupation and aggression, restore the Palestinian people’s rights, and establish an independent Palestinian state with Jerusalem as its capital.

The Israeli regime has been building settlements deep into occupied territories, defying international demands and complicating the Palestinians’ aspirations for an independent state.

Over the course of nearly two and a half years since it took over, the administration of U.S. President Donald Trump has also taken an aggressive approach against the Palestinians and in favor of the Israeli regime.

The Trump administration has unilaterally recognized Jerusalem as the “capital” of Israel and has moved its embassy there, further alienating the Palestinians.

On the eve of the 70th anniversary of Nakba Day last year, the Gaza clashes reached a peak.

Meanwhile, thousands of pro-Palestinian protesters have marched in the British capital, London, to mark the 71st anniversary of Nakba Day, with several prominent figures making speeches to demand the end of Britain’s support for Israel.