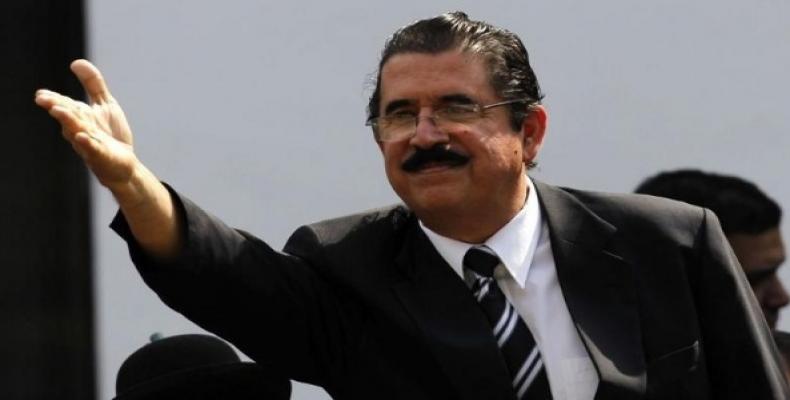 Tegucigalpa, August 10 (RHC)-- Honduras’ former President Manuel Zelaya has summoned political parties and social organizations to join in the overthrow of President Juan Orlando Hernandez (JOH), a far-right politician who has been accused of using drug money to fund his 2017 presidential campaign.

The leader of the Party for Liberty and Refoundation Party (Libre) made this call during a speech at the Central Square in Tegucigalpa, the capital of Honduras, where a massive demonstration arrived from Francisco Morazan University.

Waving their country's white-and-light blue flag, as well as the Libre party's red-and-black flag, thousands shouted "Get out dictator" and "Get out drug trafficker."

Olivia Zuñiga, the daughter of Berta Caceres, an environmental activist who was killed in 2016, said the march demonstrated the people's rejection of the far right-wing administration and its murders and corruption.

On June 28, 2009, Manuel Zelaya was overthrown by a U.S.-backed coup d'etat when he was trying to introduce land redistribution reforms and a referendum to call for a constituent assembly to change the country’s constitution.  Since then, Honduras has been on a social, political and economic downward spiral.

Juan Orlando Hernandez assumed the Presidency for the first time on January 2014.  Later he was re-elected in November 2017 after elections which were held with many "irregularities," according to international observers.

On August 4, however, the current Honduran president became implicated as a co-conspirator in a drug trafficking and money laundering case which is being processed at a New York court.