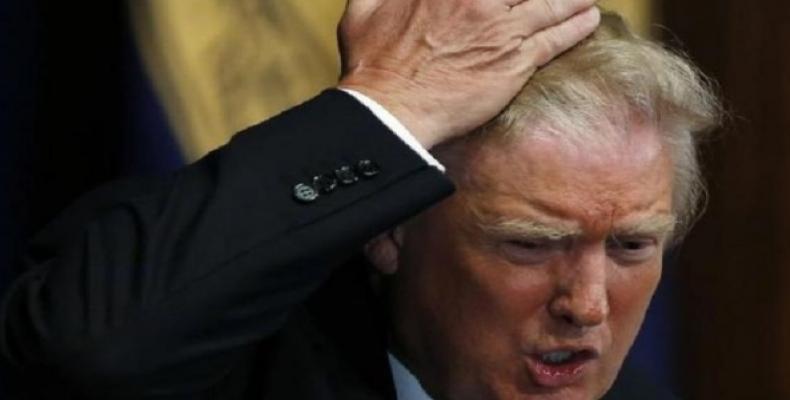 Washington, August 19 (RHC)-- U.S. President Donald Trump has reportedly shown concern privately about an emerging economic recession that could seriously dent his chance of reelection in 2020.

Trump has been "anxious and apprehensive" about the prospects for the U.S. economy amid signs of a global economic slowdown, the Washington Post reports, citing sources familiar with the matter.  The U.S. president has spoken by phone with business leaders and financial executives this past week to discuss ways to avoid an economic crash, the report said.  He has even accused the media and economists of skewing data to thwart his reelection, according to the report.

"He's rattled," a Republican close to the administration told The Washington Post.  "He thinks that all the people that do this economic forecasting are a bunch of establishment weenies — elites who don't know anything about the real economy and they're against Trump."

Trump administration officials are "planning no new steps to attempt to stave off a recession," while delivering an upbeat assessment of the U.S. economy to the president, according to the Post.

Many observer believe that signs of an economic downturn will be highly detrimental to Trump’s reelection bid, who won office partly on the pledge to strengthen the U.S. economy through his so-called America First trade policies.

Trump has dismissed negative economic forecasts and has boasted the health of the U.S. economy.  In a recent tweet, he blamed the media for trying to provoke a recession and damage his chances of reelection.  “The Fake News Media is doing everything they can to crash the economy because they think that will be bad for me and my re-election,” he tweeted.  “The problem they have is that the economy is way too strong and we will soon be winning big on Trade, and everyone knows that, including China!”

Winning reelection during recessions has historically proven to be a tough obstacle.  Since the U.S. Civil War, only one president, William McKinley, has been reelected after a recession in the final two years of his first term.