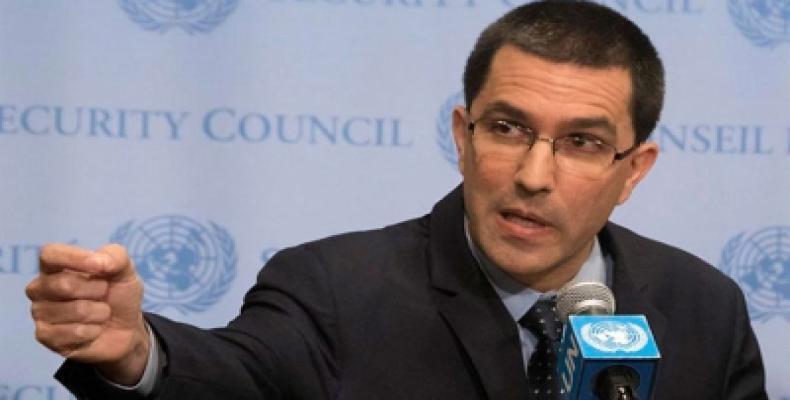 United Nations, August 20 (RHC)-- The Venezuelan government has denounced President Donald Trump's threats to establish a naval blockade and the use of force against its population to the United Nations.

Later on his official Twitter account, the top diplomat rejected Trump's threats to establish a naval blockade on the South American nation to prohibit any sea vessels from entering or leaving Venezuelan harbor with goods, foods or medicine.  Arreaza also denounced Trump’s threats of using military force against Venezuela.

“We have denounced the U.S. government to the Security Council and the UN General Secretary for the criminal blockade, and threats of establishing a naval blockade and use of force against the people of Venezuela,” tweeted the diplomat.

According to Axios media, Donald Trump proposed deploying U.S. Navy ships along the coast of Venezuela to several former and current aids.  Trump’s naval blockades threats began on August 1 when Trump told a reporter that he was considering a quarantine or blockade of Venezuela.

The Venezuelan foreign minister accused the U.S. government of intentionally undermining the dialogue between the Nicolas Maduro administration of Venezuela and the U.S.-backed opposition taking place since May under the guidance of Norway.

Venezuelan Vice President Delcy Rodriguez tweeted of the total financial blockade and potential blockade of trade: “Venezuela will assert its legitimate right to defend itself under international law.  Criminal blockade and illegal actions of the U.S. government will face a united Venezuela!  Anti-national cronies will be condemned by history #NoMoreTRUMP.