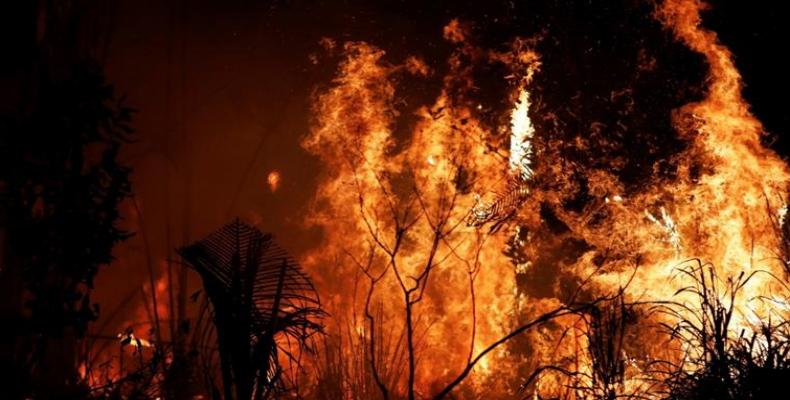 Washington, August 30 (RHC)-- The United States government has announced that it did not approve the offer of $20 million in aid to Brazil made by the countries during the G-7 summit last weekend to fight the fires in the Amazon rainforest.

“We didn’t agree to a G-7 initiative that failed to include consultations with (Brazilian President) Jair Bolsonaro,” Garrett Marquis, the official spokesperson for the White House National Security Council, said on Twitter.

“The most constructive way to assist with Brazil’s ongoing efforts is in coordination with the Brazilian government,” he added.

French President Emmanuel Macron announced on Monday that G-7 countries would earmark $20 million to help fight the massive fires raging across Amazonia.  However, Bolsonaro said the following day that he would only accept the aid if Macron retracted his statements calling the Brazilian leader a liar and suggesting the possibility of giving the Amazon “international status” to prevent its destruction.

The two leaders have become embroiled in a deeply personal and public war of words in recent days, with Bolsonaro mocking Macron's wife on Facebook and accusing the French leader of disrespecting Brazil's sovereignty.

Meanwhile, U.S. President Donald Trump, a vocal skeptic about climate change, has praised Bolsonaro’s handling of the fire crisis.  “I have gotten to know President Bolsonaro well in our dealings with Brazil.  He is working very hard on the Amazon fires and in all respects is doing a great job for the people of Brazil,” Trump wrote on Twitter.

The number of blazes recorded across the Brazilian Amazon has risen 79 percent this year since August 25th, according to Brazil's space research agency.  The fires are not limited to Brazil, with at least 10,000 square kilometers (about 3,800 square miles) burning in Bolivia, near its border with Paraguay and Brazil.

But Brazil is at the epicenter of the blazes, which Bolsonaro has blamed on environmentalists, non-government organizations and the weather.  He has also said fires in the Amazon were more prevalent under previous left-wing governments.

However, he has always been against protecting Amazon and in favor of opening it up for agricultural businesses.  After much pressure, he finally authorized the military to help tackle the fire.