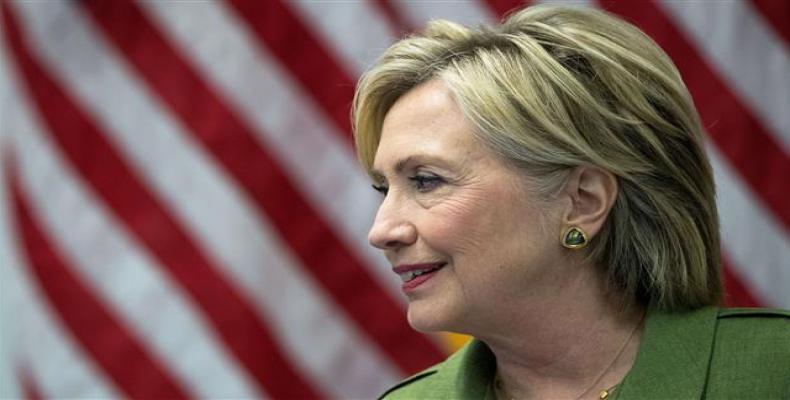 Washington, September 30 (RHC)-- Former U.S. Secretary of State Hillary Clinton has called President Donald Trump a “clear and present danger” to the United States, amid the latest scandal engulfing the White House over a controversial call to Ukraine's leader.

Hillary Clinton — Trump’s 2016 Democratic presidential rival — made the remarks while speaking at an event in Washington attended by U.S. House of Representatives Speaker Nancy Pelosi, who is behind a congressional push for the impeachment of Trump over his July 25th phone call with Ukrainian President Volodymyr Zelenskyy.

“This occupant of the Oval Office poses a clear and present danger to our future, to our democracy. And this is not a political statement.  It's a harsh reality… Because it goes to the core of our values, our strength, our freedom, our security, our prosperity," Clinton said in reference to Trump.

“It is fair to say we have known who Donald Trump is for some time now. We knew he was a corrupt businessman who cheated people, we know that his campaign invited foreign adversaries to tamper with our elections,” Clinton added.

“And now we know that in the course of his duties as our President, he has endangered us all by putting his personal and political interests ahead of the interests of the American people.  So this is a moment of reckoning.”

Trump chided Clinton during the 2016 election campaign for her use of a private server to store sensitive government emails. After intensive investigations, the FBI concluded there was classified information among the emails Clinton had sent and received but stopped short of charging her with a crime.

Pelosi authorized on Tuesday the beginning of a formal impeachment inquiry, saying Trump "must be held accountable" for his actions.  Trump reportedly urged Zelensky about eight times during the phone call to work with his lawyer Rudy Giuliani to investigate government corruption involving Biden and his son, Hunter.

The U.S. president dismissed the Ukraine allegations as another witch-hunt attempting to smear his already tarnished reputation and damage his popularity as the Americans get closer to the 2020 presidential election.

In a related development on Friday, nearly 300 former US foreign policy and national security officials also signed a letter in support of Democrats' impeachment inquiry into Trump over his conversations with the Ukrainian president.

The officials said Trump's actions concerning his efforts to urge Zelensky to launch a probe into Biden and his son constituted a “profound national security concern” for the United States.

"To be clear, we do not wish to prejudge the totality of the facts or Congress’ deliberative process.  At the same time, there is no escaping that what we already know is serious enough to merit impeachment proceedings," the officials wrote.

"President Trump appears to have leveraged the authority and resources of the highest office in the land to invite additional foreign interference into our democratic processes. That would constitute an unconscionable abuse of power," the letter said. "It also would represent an effort to subordinate America’s national interests—and those of our closest allies and partners—to the President’s personal political interest."