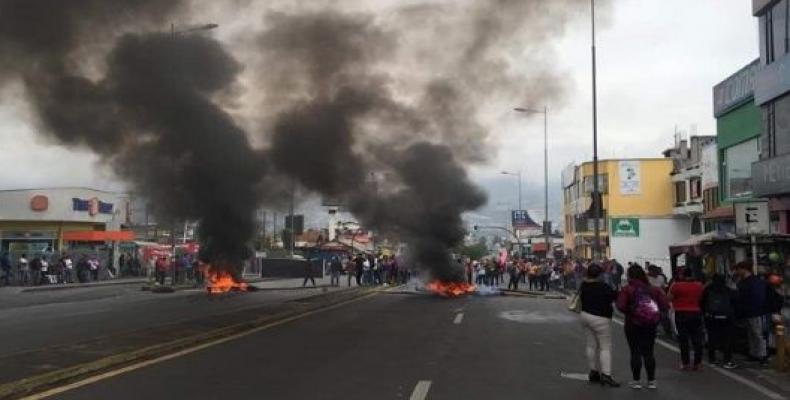 "Starting October 3rd at midnight we announce the total suspension of all activities regarding transportation as there are no financial resources to face the new price of gasoline," the President of the Federation of Urban Transportation of Ecuador (Fenatu) Manuel Medina said, urging "all to maintain unity."

Workers’ unions of public transport and interprovincial buses, as well as the Chamber of Transportation in Quito and Guayaquil later joined the strike.

The decision resulted in the government decree that all schools, both public and private, to suspend classes Thursday, warning that "if necessary they will active constitutional norms as by law the paralyzation of public services is illegal."

This comes as Ecuador's President announced Tuesday the elimination of gasoline subsidies, tax and labor reforms, and other economic measures aimed at complying with the conditions of the loans granted by the International Monetary Fund (IMF).

In a televised speech, he announced that Executive Order 883 “liberates the price of diesel and extra gasoline," justifying his decision by saying that the Ecuadorean state allocates more than $1.3 billion a year in fuel subsidies.

According to experts, the increase in fuel prices will have a domino effect on all prices as transport costs will rise, which will likely be transferred to the consumer.  As a way to compensate those who could be most affected by fuel price liberalization, President Moreno said his government will increase the number of citizens who will be able to receive conditional money transfers destined to the poor.

This means that the official number of poor Ecuadoreans will increase from one million to 1.3 million people, who will be given an additional $15 per month.

Regarding labor market regulations, the Ecuadorean president proposed legal changes and new models of flexibilization that supposedly would be aimed at facilitating the hiring of workers. Among others as reducing the income tax to one of the richest sectors of the economy, which is the banana producers.

Meanwhile, the IMF praised on Wednesday Moreno’s reforms saying in a statement that these “are aimed at improving the resilience and sustainability of the Ecuadorean economy, and fostering solid and inclusive growth.”