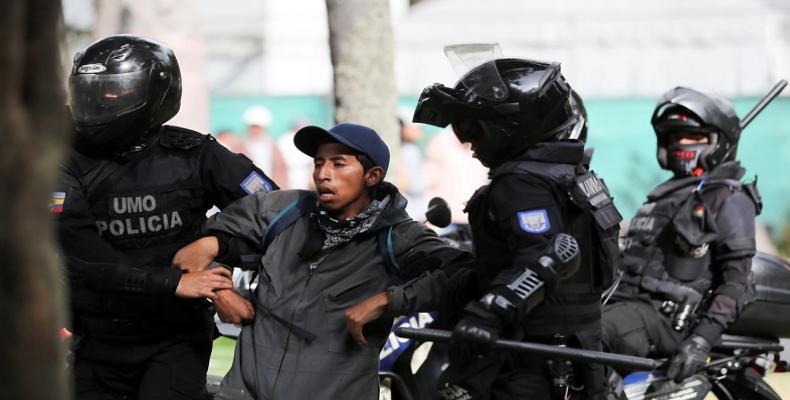 Quito, October 11 (RHC)-- For the ninth consecutive day, Ecuador's civil society movements, spearheaded mainly by the Ecuadorean Confederation of Indigenous Nationalities (Conaie), continued a nationwide strike and holding massive protests across the Andean country against President Lenin Moreno and the economic policies package he agreed upon with the International Monetary Fund (IMF).

By Friday, five people were dead, 929 had been detained and 554 people injured over the course of the past week, according to data from the country's ombudsman.  The injured and killed included members of the CONAIE along with union workers, student organizations, and others of the thousands of citizens who have taken to the streets of Quito's historic center to demand the elimination of the austerity measures attached to the $4.2 billion IMF loan the Moreno administration negotiated last March.

Protesters were also demanding Moreno's resignation and that of his interior and defense ministers, María Paula Romo and Oswaldo Jarrin.   Scenes of police repression, which has significantly marked these protests, have been transmitted almost exclusively by citizens and alternative media through social networks. Mainstream media within Ecuador has focused on broadcasting messages that call for a return to work and the declarations from government officials. The following hashtags are being used to communicate information over social media about the protests and events happening in Ecuador: #EcuadorEnCrisis, #ParoNacionaleEC, #Ecuador, #LoQueNoVeranEnLaPrensa and #SOSEcuador.

Mainstream media has also focused on the cut in fuel subsidies as the protesters' motivation, however this leaves out the labor policies introduced by the IMF agreement, which flexibilize labor and call for both salaries and vacation reductions for public servants. The administration did back down from eliminating 15 days of vacation for state workers since the protests began.

The CONAIE and Campesino organizations, those who have demonstrated the most and who will be most hurt by the new policies, have also faced defamation campaigns since the protests began. They have mainly been portrayed as generating violence and vandalism, but CONAIE leaders say their peaceful protests have been infiltrated and vociferously deny they are working on behalf of former president, Rafael Correa, as was suggested by President Moreno, Correa's former vice president, during a press conference earlier this week.

On Friday morning, after sleeping in shelters provided by public and private universities in Quito, Indigenous protesters marched towards the National Assembly where they congregated for a couple of hours.  Just before noon, however, security forces began to expel citizens from the streets surrounding the building.

Videos, photos and audios, broacast through social networks, showed marchers being bombed with tear gas and intimidated by police in armored cars. Images of injured and citizen arrests emerged.

Indigenous and social movements again pointed out that they will not dialogue with the government and will continue to protest until the government eliminates the IMF policy package, and for Moreno, Romo and Jarrin to step down.

Meanwhile, according to his latest statements, President Moreno, who, for the first time in over 120 years, moved the capital to Guayquil where he has remained for nearly the entire week, insisted that he will not revoke his budget measures.

While private media continued to transmit images of places where there are no demonstrations, social organizations' alternative media called on the international community to denounce the repression in Ecuador.

Ecuadoreans with their cell phones continue to report on the violence, despite the media blackout. From-the-ground images feature metal barriers with 220V electric fences twined around them to prevent protesters to get closer to the assembly and other government buildings.

At the same time, the Pontifical Catholic University of Ecuador (PUCE) posted a message indicating that the interior ministry had agreed to create a “protection zone” around it and other universities that have become makeshift shelters for protesters over the past few days. However, PUCE officials reported the police had sent another round of tear gas into the university.

Further into the city's historic district, protesters try to reach the Presidential Palace, and social media images show security officers in armored vehicles throwing tear gas grenades into a private house in the vicinity that was supposedly preparing food for protesters.​​​​​​​

“The U.S. supports President Moreno and the Government of Ecuador’s efforts to institutionalize democratic practices and implement needed economic reforms. We are aware and monitoring claims of external actor involvement in these demonstrations."

His statement went on to read that the U.S. "recognizes the difficult decisions that the Government of Ecuador has taken to advance good governance and promote sustainable economic growth. Respect for democratic rights and institutions is the foundation for Ecuador’s future growth and stability. We will continue to work in partnership with President Moreno in support of democracy, prosperity, and security," said the functionary.