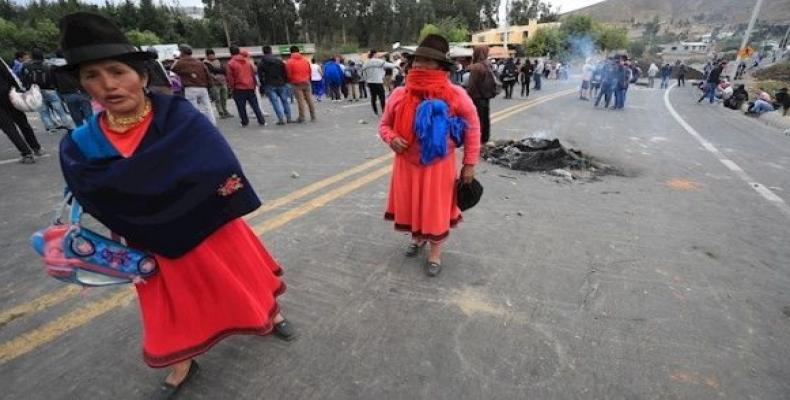 Quito, October 5 (RHC)-- Ecuador’s indigenous and union organizations kept protests going on Saturday and promised not to let-up in their push to overturn President Lenin Moreno’s austerity measures, which have convulsed this South American country for three days on a row.

"The Indigenous movement is mobilizing indefinitely in the whole country," the president of the Confederation of Indigenous Nationalities of Ecuador (CONAIE), Jaime Vargas, said.  After blocking roads in rejection of the end of fuel subsidies, some private transport unions called off their strike on Friday night.

Nevertheless, other heavy transport and taxi unions announced that they would continue to support the nationwide strike, especially at the coastal provinces.  Unlike what happened in previous days, Ecuadorean mainstream media were forced to recognize the magnitude of the ongoing social protest.

"The struggle keeps on going because it keeps on going!! We will continue to occupy the Pan-American E35 highway and we will fight firmly until the Paquetazo falls," said Leonidas Iza, the president of the Cotopaxi's Indigenous and Farmers Movement. He announced that the strike is indefinite and mobilization against IMF and neoliberalism will take the capital city.

On Saturday morning, private outlets reported that the roads had been totally blocked in provinces with the highest percentage of indigenous population, such as Cotopaxi, Imbabura and Chimborazo.

On the routes departing from Cuenca, Macas and Guaranda towards Riobamba, “authorities have been uncapable of clearing roadblocks," El Comercio journalists reported.  Carlos Tagua, the Chimborazo Confederation of Indigenous Movements president, told them that "our comrades are mobilized across all the province's parishes and communities."​​​​​​​

Before noon, alternative media Republica del Banano transmitted images of the Indigenous and farmers taking the city of Riobamba and explained that "there was no police who could stop them."

In Chimborazo, socialist activists, students, teachers, farmers and indigenous peoples carried out powerful uprisings during the 20th century. In fact, they made history.
This tradition of tough resistance endures to this day and, sometimes, it frightens the security forces.​​​​​​​​​​​​​​

As it could be seen through images broadcasted live, army personnel on Saturday morning tried to occupy farmer facilities in Nizag, an indigenous community located in Sibambe.   Given the impossibility of evicting hundreds of Chimborazo demonstrators, the Ecuadorean troops remained ​​​​​​​wandering among the people concentrated there.  No incidents were reported.