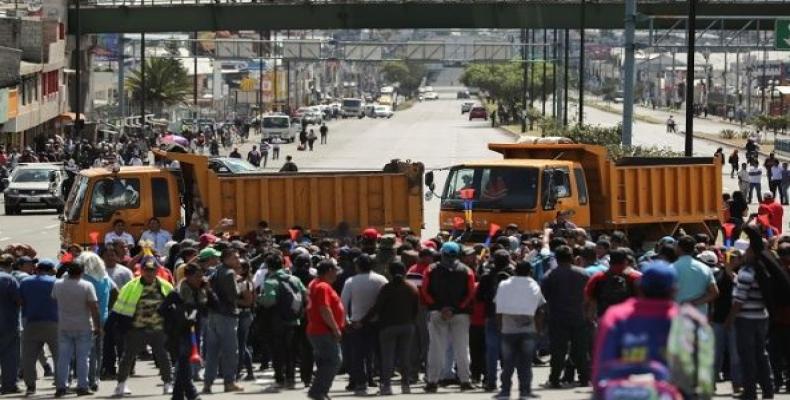 Quito, October 7 (RHC)-- Indigenous groups of Ecuador continued their march towards Quito, the capital city, demanding respect for the collective rights of the people from President Lenin Moreno.

The president of the National Indigenous of Ecuador (CONAIE), Jaime Vargas, said as a community they reject the brutalities by the security forces in the past few days.  "We demand the immediate release of the 350 arbitrarily detained for exercising the constitutional right to resistance," Vargas said.

Besides, he said they will only talk with the government once they arrive in Quito.  "We have completely closed the dialogue with the government, there is no dialogue until we reach the capital ... We are not here to negotiate behind the people's backs.  The people have risen and that is what we are going to respect," he said.

Ecuadorean Indigenous organizations are scheduled to arrive Tuesday.  They will join the national strike on Wednesday.   In Quito, various protests are being held.  Workers organized a picket line in front of the headquarters of the ruling party, Alianza Pais, Monday.

The national strikes have been called by various unions on October 3rd after Moreno announced "Paquetazo", a package of austerity policies to comply with suggestions presented by the International Monetary Fund in exchange for billions of dollars of loans.

Due to the mobilizations and road closures, classes were suspended throughout the country. The General Secretariat of Communication issues a statement saying school classes had to resume Monday but then issued a later statement declaring the closure of schools in the highlands areas.​​​​​​​