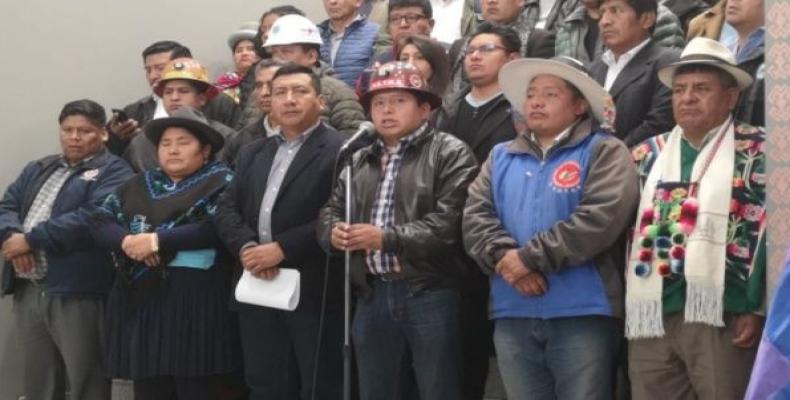 La Paz, October 22 (RHC)-- In Bolivia, right-wing protesters have launched numerous violent attacks across the country as preliminary results indicated that incumbent President Evo Morales was on course for a first round victory.  Attacks included the burning down of vote counting centers and assaulting Indigenous supporters of Morales.

In response, social movements have called for a state of emergency, and a mobilization of workers in the streets to defend the vote.

The violence followed a call by opposition candidate Carlos Mesa for his supporters to take to the streets and not recognise the preliminary results being published by electoral authorities in Bolivia.

The first such action was in the city of Sucre, an opposition stronghold, where rioters set fire to the regional electoral authority.  Elsewhere in the country, government buildings were attacked in Tarija, Oruro, and the campaign headquarters of Morales’ party was vandalised.  In Cochabamba, where Morales was clearly leading the vote, protesters attempted to seize control of the Campo Ferial, which is the hall in which the votes were being counted.

Other actions followed in La Paz, where the opposition supporters assaulted an Indigenous woman who supported Evo Morales.  She spoke to the media following the attack saying: “I was just standing over there when a stone hit me”.  Also in La Paz, rioters blocked election materials from being delivered for the vote, this meant that the counting had to be suspended, just 48% of the votes have been counted, in a region where Morales is expected to win a large share of the vote. Meanwhile, in the opposition stronghold of Santa Cruz, 100 percent of votes have been counted, as protesters allowed the count to go ahead.

There are concerns that the opposition will not recognise the full results if they give Evo Morales a victory in the first round. On Tuesday morning, CONALCAM, a coalition of Indigenous groups and workers unions that are affiliated to Morales’ ‘Movement Towards Socialism’ held a press conference where they declared a state of emergency, calling for mobilizations in the streets to defend democracy.

Juan Carlos Guarachi, leader of the Bolivian labor union federation (COB) said: “We declared ourselves in a state of emergency and the first national, peaceful, mobilization will be on Wednesday, October 23rd at the Plaza San Francisco at noon.  We denounce the oligarchic and privatizing interests that hide behind these violent actions.”