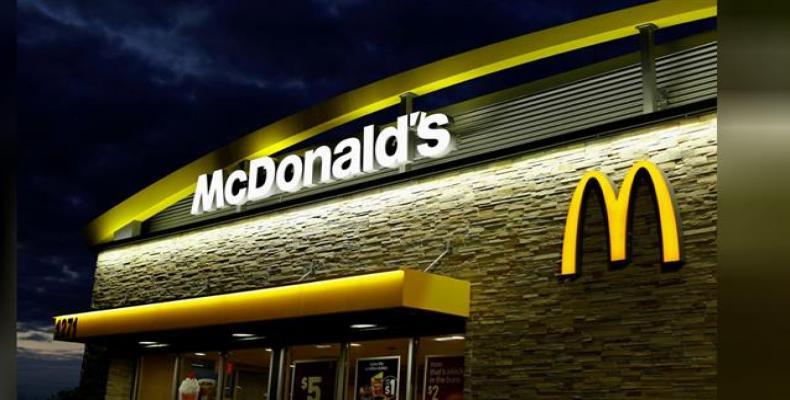 Detroit, November 14 (RHC)-- McDonald’s Corp is being sued by workers in the U.S. state of Michigan who accused the American fast-food chain of allowing pervasive sexual harassment to flourish at its restaurants nationwide.

The proposed class action lawsuit filed in a Michigan state court accused McDonald’s of lacking policies to address sexual harassment, failing to train managers to prevent it and retaliating against workers who complain.

It said McDonald’s “creates and permits a toxic work culture from the very top,” citing last week’s firing of Chief Executive Steve Easterbrook for having an improper consensual relationship with an employee.  Easterbrook has said he made "a mistake."

McDonald’s said in a statement it is implementing safe-workplace training at its corporate-owned restaurants, and encouraging franchisees to do the same.  “There is a deeply important conversation around safe and respectful workplaces in communities throughout the U.S. and around the world,” McDonald’s said, echoing comments made in August by its new chief executive, Chris Kempczinski.

The U.S. Equal Employment Opportunity Commission said on Thursday that the number of sexual harassment complaints is growing.  Roughly 95% of McDonald’s U.S. restaurants are franchised, and the plaintiffs’ lawyers said the Chicago-based company does not push hard enough to improve training at the franchised restaurants.

Workers have filed more than 50 similar complaints against McDonald’s and its franchisees in the United States over the last three years.   Tuesday’s lawsuit was among the first brought as a class action, representatives of the plaintiff Jenna Ries said.

Ries, 32, worked for 1-1/2 years at a franchised McDonald’s in Mason, Michigan, near the state capital of Lansing.  She said a restaurant manager there subjected her to repeated sexual epithets and contact, including by pinning her against a wall in a walk-in freezer.  “I constantly lived in fear of losing my job,” Ries told reporters on a conference call.  “I needed the money.”

The lawsuit was filed on behalf of women who worked at the Mason restaurant in the last three years. It seeks improved training, added protections for employees, and more than $5 million of damages.

Ries is represented by the American Civil Liberties Union and the Time’s Up Legal Defense Fund, and supported by Fight for $15, which seeks higher wages and better treatment for workers in fast food and other industries.

The plaintiffs could find it difficult to hold McDonald’s responsible for the actions of the Michigan franchisee.  A federal appeals court in San Francisco last month said McDonald’s does not exercise enough control over franchise workers to be considered a “joint employer.”