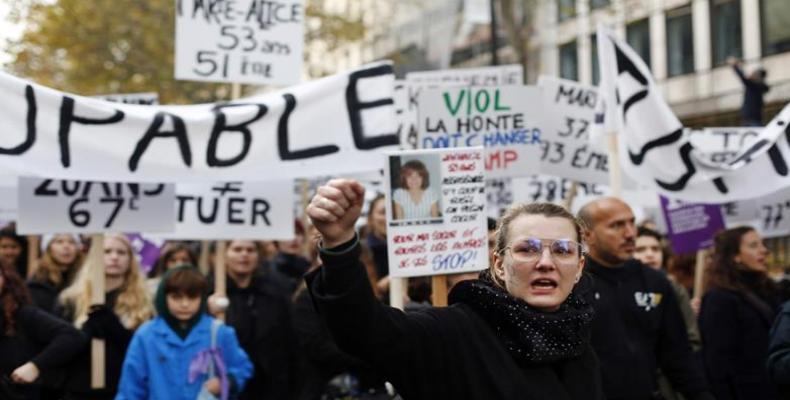 In Paris, a wave of purple flags and signs snaked from the Place de la Republique amid an unprecedented public campaign to decry violence against women, and honor the 130 women that activists say have been killed in France this year by a current or former partner.

The Paris march, mainly attended by women, was one of the 30 organized throughout France involving nearly 70 organizations, political parties, unions and associations.  Feminist collective #NousToutes ("All of Us"), meanwhile, said 100,000 marched in Paris and 150,000 more across France, hailing it as "the biggest march against gender-based violence in French history."   Caroline De Haas, one of the Paris organizers, said "the level of awareness is moving at breakneck speed."

While France has a progressive reputation and pushes for women's rights around the world, it has among the highest rates in Europe of domestic violence, in part because of a poor police response to reports of abuse.

At Saturday's march, French film and TV stars joined abuse victims and activists calling for an end to "femicide." Many held banners reading "Sick of Rape."  The protests came on the UN's International Day for the Elimination of Violence Against Women and is aimed at pressuring the French government before it unveils new measures on Monday to tackle the problem.

The measures are expected to include seizing firearms from people suspected of domestic violence and prioritising police training so they won't brush off women's complaints as a private affair.

Some among Saturday's marchers wanted a billion euros in government investment to tackle the issue, though the funding is expected to fall far short of that.