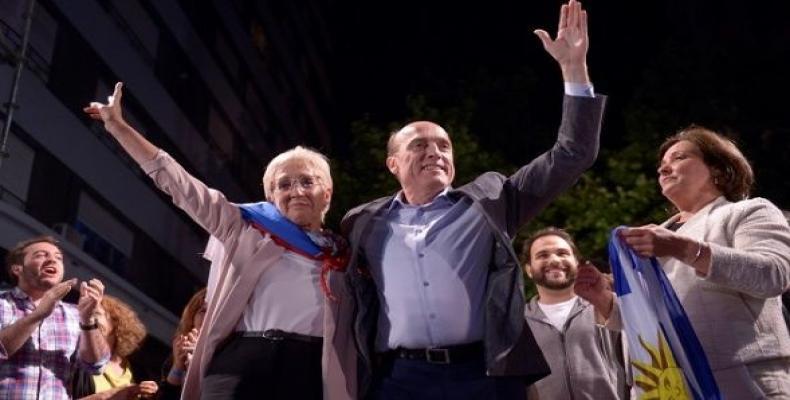 Montevideo, November 28 (RHC)-- The Frente Amplio candidate for the Uruguayan presidency, Daniel Martinez, announced on Thursday that he accepts the results of the second round of the elections, thus, conceding the leadership to the right-wing candidate Luis Lacalle Pou.

"The evolution of the scrutiny of the votes observed does not change the trend, therefore we accept the elected president @LuisLacallePou, with whom I will hold a meeting tomorrow.  I thank those who trusted us with their vote from my heart," Martinez tweeted this afternoon.

And Martinez added: "We will continue to defend democracy with more force than ever," despite losing a very close election to the right-wing Partido Nacional Party.

The results of the second electoral round in Uruguay showed a slight advantage for the Partido Nacional candidate over Martinez.  Martinez was allowed to dispute the results because they were so close; however, he has chosen to accept the results and concede the presidency to Lacalle Pou.

In an interview with teleSUR earlier this week, analyst Pablo Kunich said that if Lacalle Pou's victory is confirmed, a series of neoliberal measures could be imposed in Uruguay that would undermine the social achievements that took place during the past 14 years.

"If the right triumphs, a policy of economic adjustments will probably come and it will be necessary to see if they reach the necessary consensus to do so by way of shock or gradual," Kunich said.

Pablo Kunich explained that the candidate from the right-wing National Party comes from a tradition of repressive and neoliberal policies.  During his time as a senator, he did not vote on any of the policies that extended the rights of Uruguayans, in this context the measures to be taken will be anti-popular measures.