Number of U.S. sailors infected with COVID-19 on aircraft carrier rises to 155 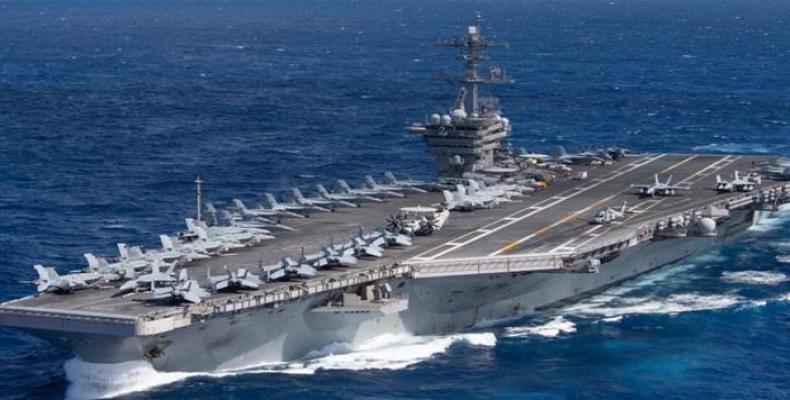 San Francisco, April 5 (RHC)-- The number of American sailors tested positive so far for the coronavirus on the USS Theodore Roosevelt aircraft carrier has surged 13 percent to 155 within the past 24 hours, the U.S. Navy has confirmed amid the sacking of the warship’s captain for publicizing the debacle.

The Navy further declared in a statement that 44 percent of the warship’s 5,000-strong service members had been tested and 1,548 of them were transferred ashore, noting that none of the infected sailors have been hospitalized.  It did not elaborate on the conditions of those that have so far tested positive for the highly-contagious virus.

The carrier’s Captain Brett Crozier was relieved of his command of the Theodore Roosevelt last Thursday after the public leak of a contemptuous letter in which he urged the US Navy to take stronger action in efforts to contain the spread of the virus aboard the nuclear-powered warship.

In the letter, which was published by the San Francisco Chronicle and caught the Navy by surprise, Crozier described how bleak the situation was onboard the carrier as more sailors were diagnosed with the virus.  He further stated in his memo to the Navy's Pacific Fleet that the warship lacked sufficient quarantine and isolation facilities, warning the current strategy would slow but fail to eliminate the virus.

U.S. Navy’s acting Secretary Thomas Modly then announced in a Thursday briefing that Crozier had been “relieved of command,” explaining that the captain had allowed "the complexity of his challenge with the COVID-19 breakout on the ship to overwhelm his ability to act professionally when acting professionally was what was needed the most at the time."

The fallout from the Navy’s firing of Crozier is growing, however, as Democrats in both chambers of the US Congress called on Friday for a probe into his dismissal as well as the coronavirus outbreak on board the warship.

Democratic Senators Richard Blumenthal of Connecticut and Chris Van Hollen of Maryland wrote a letter co-signed by 15 other senators to Pentagon inspector general Glenn Fine demanding that his office "immediately conduct a formal investigation" into the outbreak and the Navy's decision to relieve Crozier of his command.

"It is essential that your office conduct a comprehensive investigation to avoid any potential conflicts of interest within the Navy chain of command, and we encourage you to evaluate all relevant matters associated with the dismissal and the outbreak on the ship," the letter read, as quoted in local media reports.

Separately, Democratic Congressmen Ted LIeu of California and Ruben Gallego of Arizona also wrote to Fine on Friday calling on him to "open an investigation into this matter as soon as possible."  "As veterans, we were taught that protecting the health and safety of troops was one of the highest priorities of any commander," they wrote, insisting that they are "disturbed" by the captain’s firing.

This is while sailors on the warship cheered for their departing captain Thursday night as he was relieved from duty by the U.S. military.