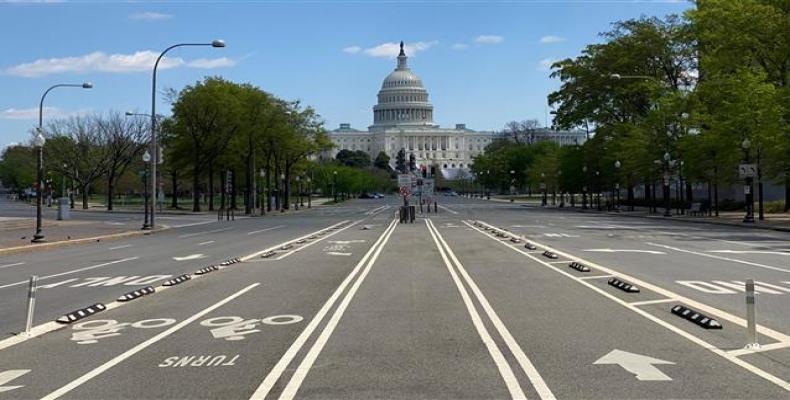 Washington, April 17 (RHC)-- A U.S. military task force is preparing to secure the country's capital amid coronavirus crisisUS government officials in Washington, DC are preparing for a coronavirus epidemic in the capital similar to New York, one that could potentially cripple the government, according to US media reports.

District of Columbia Mayor Muriel Bowser on Friday ordered a one-month extension of the state of emergency over the COVID-19 pandemic, as cases in the region grow at a rapid pace.

There were over 20,000 patients with confirmed cases of the coronavirus in the capital and the neighboring states of Virginia and Maryland as of Thursday evening, a figure that has doubled in just one week, according to The Washington Post.

A secretive military task force charged with securing Washington was activated on March 16th to deal with the public health crisis, the Newsweek said in a report on Thursday.  Created in 2004, the Joint Task Force National Capital Region (JTF-NCR) is responsible for the security of Washington and the surrounding cities in Virginia and Maryland.

The task force is charged with facilitating continuity of government, particularly moving civil and military leaders to secret locations were the order given to evacuate the city.  "No one wants to talk evacuation, especially when there's nowhere to go," an unnamed senior military officer told Newsweek.

As sweeping stay-at-home orders in 42 U.S. states to combat the coronavirus have decimated the economy, protesters have begun taking to the streets to urge governors to rethink the restrictions.  The United States, with the world’s third-largest population, has now suffered the greatest number of reported fatalities from the coronavirus, ahead of Italy and Spain.  More than 670,000 people in the U.S. have been infected with the coronavirus and over 33,000 have died as of Friday morning, according to a Reuters tally.

A few dozen protesters gathered in Virginia's state capital of Richmond on Thursday in defiance of Governor Ralph Northam's stay-at-home mandate to combat the pandemic, the latest in a series of demonstrations this week across the US.

As their frustration with life under lockdown grows, the protesters have started to openly defy the social distancing rules in an effort to put pressure on state governors to ease them.

Over 90 percent of Americans have been under stay-at-home orders to contain the virus, forcing companies, shops and restaurants to close their doors, throwing some 22 million people out of work.

President Donald Trump, who is under immense pressure for his slow and inadequate response to the outbreak, is pushing to reopen the U.S. economy.  For the first time in history, every U.S. state is under a disaster declaration due to the coronavirus pandemic.  Federal disaster declarations authorize funding for states, territories and local governments.