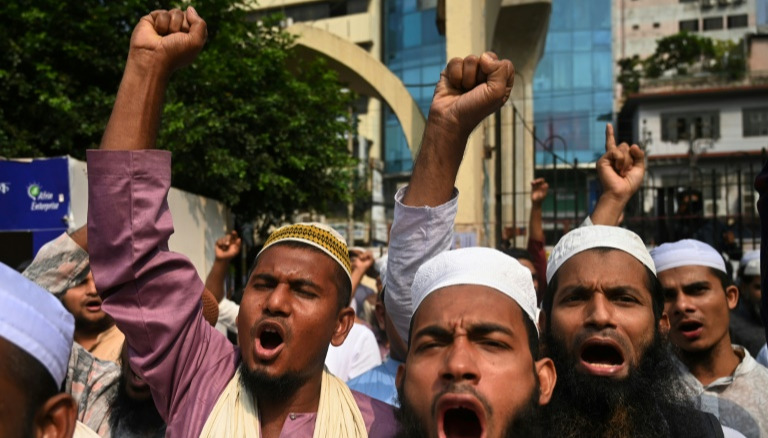 Bangladesh has seen one of the biggest protests against France.  (Photo: Mohammad Ponir Hossain / Reuters)

Dhaka, November 2 (RHC)-- At least 50,000 people have staged the biggest demonstration yet in Bangladesh over French President Emmanuel Macron’s stance on the right to publish cartoons of the Prophet Muhammad, as they tried to reach the French embassy in Dhaka, police said.

Macron’s comment that Islam was “in crisis” and his defence of the offensive caricature, which Muslims say is an insult to their prophet, has prompted a global backlash, with Muslims across the world holding protests and calling for a boycott of French products.

The rally, which started at Bangladesh’s biggest mosque in the capital Dhaka, was stopped from getting close to the French embassy where security had been stepped up.

The march was more than two kilometres (1.25 miles) long and crowds – ignoring coronavirus social distancing rules – carried effigies of Macron, caricatures and a fake coffin for the French president.

Police estimated some 50,000 people took part in the protest, which demanded a boycott of French products, while organisers said there were more than 100,000 people.

Protesters chanted “No defamation of the Prophet Muhammad” and burned an effigy of the French leader.

Police put up a barbed wire barricade across a major road to stop the demonstrators getting close to Dhaka’s embassy district and the event broke up without trouble.

Macron sparked protests across the Muslim world after the murder last month of French teacher Samuel Paty – who had shown his class a cartoon of the Prophet Muhammad – by saying France would never renounce its laws permitting blasphemous caricatures.

The third major anti-France demonstration in Bangladesh in the past week was called by Hefazat-i-Islam, one of the biggest Muslim political groups in the country of 160 million people.