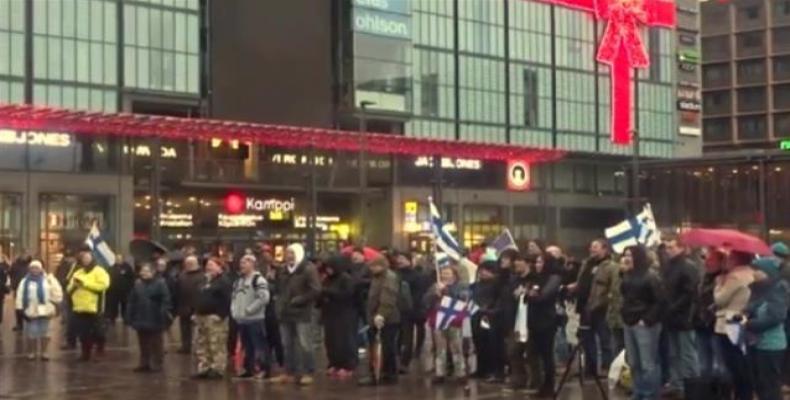 Helsinki, December 7 (RHC)-- People have taken to the streets in the Finnish capital, Helsinki, to stage a demonstration against policies adopted by the European Union (EU) on refugees.

On Sunday, dozens of protesters carried anti-refugee banners and called on the government to stop taking in asylum seekers. They also chanted slogans against the Finnish government.

So far this year, more than 17,000 asylum seekers have reportedly arrived in Finland, a country of almost 5.5 million people on the edge of the Arctic.

The Finnish government has launched random border checks as well as identity checks amid a surge in the number of asylum seekers traveling to the European country.

Back in September, Finland was the only EU member that abstained from voting on the relocation of 120,000 refugees across the bloc. Helsinki only accepted its two-percent share of the asylum seekers.

Europe is facing record refugee arrivals. Thousands of asylum seekers, many of whom from war-ravaged Syria, travel from Turkey to Greece by boat. They then transit from Greece through Macedonia, Serbia, Croatia, and Slovenia to Austria, with the ultimate goal of reaching Germany and other wealthy Western European states.