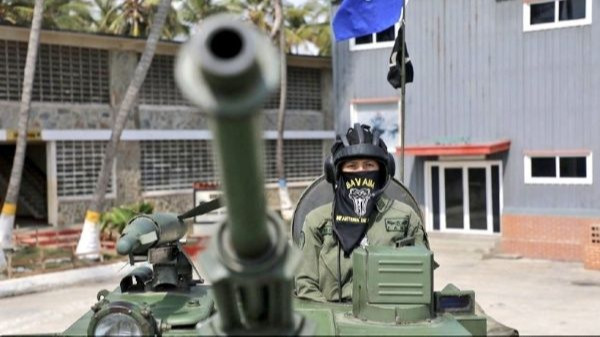 The Venezuelan army has dislocated numerous units on the border with Colombia in order to combat paramilitarism. | Photo: Twitter: CEOFANB

Caracas, April 9 (RHC)-- The Chief of Staff of the Strategic Operational Command of the Bolivarian National Armed Forces (Ceofanb) of Venezuela, Admiral Remigio Ceballos, reported Friday that Venezuelan troops "maintain control" in the state of Apure.

Ceballos' statements came in an interview with Union Radio, in which the military said that the Venezuelan Army remains active "attending to the population returning to their homes, thoroughly reviewing the area and making arrests of those suspected of collaborating with irregular groups," which have been confronting the military forces since March 21.

Ceballos assured that these operations will continue until "calm returns" and peace can be restored in this state bordering Colombia, scene of hostilities for more than two weeks, which so far have left almost twenty dead on both sides.

The Chief of the General Staff described what he called the "complex geographical conditions of the deployment zone", where abundant vegetation predominates and which, according to Caracas "is abandoned by the Colombian Army and at the mercy of paramilitaries, guerrillas, drug traffickers and any irregular group wishing to operate without control.".

He also denounced that "these actions are part of the irregular war against Venezuela" and recalled the coercive measures imposed by the United States and its allies to asphyxiate the Venezuelan people, which, he stressed, "they have not achieved".