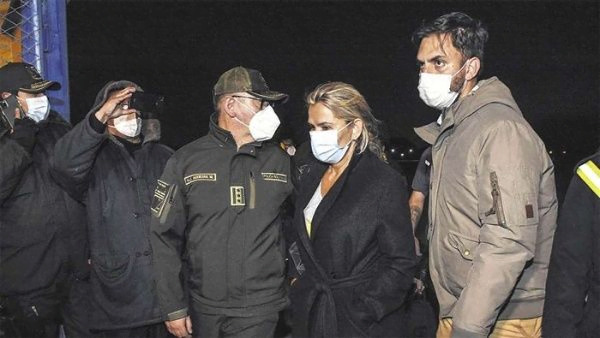 In addition to the coup d'état case, other judicial investigations are being carried out against former de facto president Jeanine Áñez. | Photo: El Deber

La Paz, July 14 (RHC)-- Magistrate Antonio Amaru, of the First Court of Criminal Instruction of the Bolivian city of El Alto, informed Jeanine Áñez of the extension for another two months of her preventive detention, while rejecting an appeal by the prisoner to assume in freedom her defense in the framework of the coup d'état case.

The ruling given by Amaru comes a few days before the fourth month of preventive detention of the de facto ex-governor.  The magistrate explained that this term will now be extended to six months, to allow the Prosecutor's Office to deepen its investigation.

In addition to this case, other judicial investigations are being pursued against Áñez, including one for genocide for the 37 victims of military and police repression against protesters in the towns of Sacaba, Chapare province, on November 15, 2019 and in Senkata, El Alto, on November 19 of the same year.

The Prosecutor's Office has already proposed the formal accusation so that the Plurinational Legislative Assembly (ALP) authorizes the initiation of three other trials of responsibility against the former de facto president.

These would correspond to the contracting, without the endorsement of the ALP, of a loan from the International Monetary Fund (IMF) for US$ 327 million, a complaint for the irregular awarding of the administration of the companies registry (Fundempresa), and a complaint for the crime of discrimination.

The latter is promoted by Bolivian citizens who were prevented from entering the country during the first quarantine in 2020, when the borders were closed due to the pandemic.
In a message broadcast through the social network Twitter, Añez described the extension of preventive detention as illegal.

At the same time, one of her lawyers, Alain de Canedo, said that the defense will present another request for release in a short period of time.  Áñez is charged with sedition, terrorism and conspiracy for her participation in the rupture of the constitutional order in Bolivia in November 2019, when the government of former president Evo Morales was overthrown.

She was arrested on March 12, taken first to the Obrajes prison and later to the La Paz prison, where she is being treated for health problems she claims to have.