Bolivian committee calls for speeding up trial against Jeanine Áñez 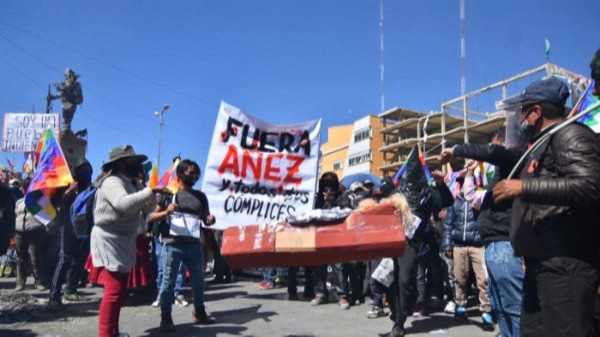 La Paz, February 10 (RHC)-- In Bolivia, the Committee for the Trial against Coup Plotters of 2019 has demanded to speed up the judicial processes against the former de facto governor Jeanine Áñez for sedition, conspiracy and terrorism, while the former senator began a hunger strike in the Miraflores prison.

In the midst of the wait for a trial against Áñez for alleged crimes to proclaim herself president in November 2019, the citizens' committee seeks to expedite the process known as "Coup 1" -- in which the former senator is being tried for her crimes.

In this sense, Aldo Michel, general coordinator of the Committee said: "We are already announcing a visit to the prosecutor (Juan) Lanchipa with the expectation that he will give us a report on the slowness of this process. Unfortunately, the main responsible parties have not declared."

The first process, named "Coup d'Etat I," began two years ago with the denunciation of former congresswoman Lidia Patty.  In this regard, Michel said: "It is important the so-called Coup I. For sedition, conspiracy and terrorism, it will be possible to obtain a strong sentence, but also in the expectation of expanding other criminal charges."

For its part, the second so-called "Coup d'Etat II" has its first oral hearing scheduled for this Thursday.  Jeanine Áñez, as well as the former chiefs of the armed forces and the police are the targets to be charged in Coup d'Etat II.  The crimes charged could mean a penalty of up to 12 years of imprisonment.

The former de facto president is accused of the crimes of resolutions contrary to the Constitution and the laws and breach of duties, which are related to the actions prior to her assumption of power in November 2019.

Jeanine Añez declared herself on hunger strike hours before the beginning of the trial for alleged crimes in order to proclaim herself President Nov.2019. In her year in office she prosecuted all the electoral vocals for fraud but did not present evidence: Carolina, Jeanine's daughter: @ConexiontlSUR