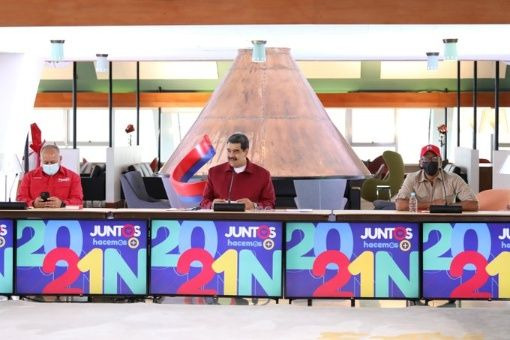 The Venezuelan president remarked the democratic nature of the electoral process on November 21. | Photo: @PresidencialVen

Caracas, September 22 (RHC)-- The president of Venezuela, Nicolás Maduro, denounced on Tuesday that his Colombian counterpart Iván Duque orchestrates destabilization maneuvers, with the support of the White House, against the dialogue process taking place in Mexico between the Bolivarian government and the opposition.

During the official launching of the Aristóbolo Istúriz Campaign Command, the president expressed: "Iván Duque leads the conspiracy against peace in Venezuela and the dialogues in Mexico."   And Nicolas Maduro added that the head of the delegation of the Executive, Deputy Jorge Rodríguez, will take the evidence of the orchestrated plans in Colombia to attack Venezuela to the next round of talks.

"We believe in dialogue and we will advance in agreements in pursuit of the economic recovery and peace of the nation," added the head of State, while urging the opposition to play fair and move away from violent and terrorist plans, referring to the increase and intensification of the war of extremist sectors against Venezuelan public services such as the electric station in the state of Aragua and the cyber-attack to Banco de Venezuela S.A.

The Venezuelan Head of State deepened that the nation has the spiritual strength to face a continued unconventional and Machiavellian war against the people and aimed at boycotting the democratic electoral process.

Regarding the upcoming elections, President Maduro pointed out that the Aristóbolo Istúriz Campaign Command has eight working teams for the mega-elections of November 21st.  "Venezuela will hold its 29th election in 21 years, of which the left has won 26, lost two, and recognized all the processes immediately", stated the President.

The Venezuelan statesman referred to the positive balance left by the VI Summit of Heads of State of the Community of Latin American and Caribbean States (Celac), about which he said that Venezuela went to extend its hand for the understanding of Latin America.

"We approved a set of guidelines for the future of Celac, its institutional strengthening and other proposals such as the creation of a general secretariat, and the reactivation of councils of ministers at the economic and financial, social and political levels in the member countries.

He also described the participation of Venezuela, which arrived on behalf of humble and working people, as a great impact, and described the exchanges with his counterparts from Bolivia, Cuba, St. Vincent and the Grenadines, Dominica, Mexico and Peru as profitable.

With the Peruvian President, Pedro Castillo, he discussed issues of great interest such as the Return to the Homeland Plan, which promotes the return of Venezuelans from Peru (some 42,000 currently registered); and joint agreements in the economic and commercial spheres, associated with the purchase of Peruvian industrial and agricultural products.