Venezuelan president denounces boycott by Colombia and U.S. of dialogue with opposition 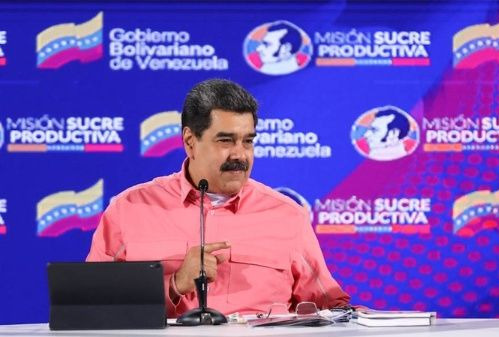 The Venezuelan president denounced the maneuvers of his counterpart Iván Duque to sabotage the dialogues with the opposition. | Photo: @PresidencialVen

Caracas, September 8 (RHC)-- Venezuelan President Nicolás Maduro has denounced the attempts of Colombia and the United States to boycott the dialogue process between the Government and the opposition forces that recently completed its sessions in Mexico.

"President Iván Duque, desperate and in asylum, at the head of an outlaw narco-State, ordered the raid and assault of the Venezuelan petrochemical fertilizer company and subsidiary of Petróleos de Venezuela (PDVSA), Monómeros, with the intention of provoking the abandonment of the talks by our delegation," said Nicolas Maduro.

Likewise, the Venezuelan president insisted that external agents are trying to break with the dialogue initiative and submerge the country in a crisis.  "I make these warnings and denunciations, on which we will show evidence in the coming hours (...)  There are international maneuvers from Colombia and the United States to put an end to this process built with patience and wisdom," he added.

Regarding Duque's maneuvers, President Maduro pondered the timely response issued by his Executive Vice President, Delcy Rodríguez, who via Twitter reproached the Colombian president's interference.   "It is another expression of incitement to the opposition to return to their violent adventures of conspiracy," he said.

Maduro congratulated the signing of two partial agreements between the Government and the opposition, which focus on the ratification and defense of the Essequiba Guayana, in accordance with the 1966 Geneva Agreement; and the protection of the Venezuelan economy and the social protection of the people, through the rescue of assets stolen from that country, which would be destined to promote its economic-social development.

President Maduro also emphasized the successful course of the electoral process for the elections to be held on November 21, where the National Electoral Council (CNE) informed about the successful closing of the registration process.

Maduro praised the fact that 37 national organizations with political purposes registered candidacies as part of a process that will elect 23 governors and 335 representatives of municipal mayorships.

In this regard, the president detailed the presence of a record 70,244 registered candidates. "We are building on all fronts a powerful, possible, beautiful Venezuela... There will be no possible threat to stop us or make us back down in our efforts to build a sovereign, socialist, free nation", he said.

"Last year, we took a gigantic step forward with the election of the new National Assembly, born from the vote of the people, of the ordinary people.  Now it is a matter of recovering spaces, growing and prospering on all fronts."