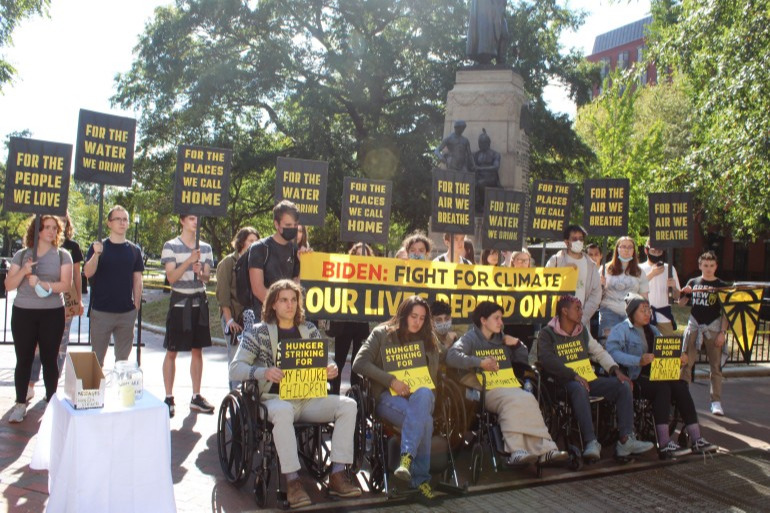 Washington, October 23 (RHC)-- Sitting in the sun across the street from the White House, 18-year-old Ema Govea holds a black and yellow sign saying she is on a hunger strike to demand action against climate change.

Govea says she would rather be at school in her hometown of Santa Rosa, California, but the urgency of the moment has compelled her to act.  She and four other activists from Sunrise Movement, an environmental advocacy group, began their protest on Wednesday.  They say they will not eat until President Joe Biden follows through on his campaign promises to enact meaningful measures to cut greenhouse gas emissions and transition the US to a green economy.

“We are putting everything that we have on the line; we’re risking everything to fight for this world that is absolutely worth fighting for,” Govea told Al Jazeera on Friday.

The hunger strikers want Biden to push for the full $3.5 trillion in his proposed social spending agenda that includes measures to cut carbon emissions and mitigate the effects of climate change.

Amid resistance from conservative Democrats, particularly Senators Joe Manchin of West Virginia and Kyrsten Sinema of Arizona, the U.S. president acknowledged last week that it is likely that the plan will be downsized.  The White House is negotiating with lawmakers over what parts of the legislation would be dropped.

Activist Ema Govea said Biden should act like a “responsible adult and do what is necessary..  “It’s clear that he wants to be a climate leader. But at this point, it is all talk, no action,” she said.

The activists urged Biden to push through his agenda before the COP26 international climate summit in Glasgow starting at the end of this month, saying that the world would follow the U.S. if it does the right thing.

Biden himself has been issuing warnings about the gravity of the climate crisis. “The existential threat to humanity is climate change,” he said at a town hall meeting broadcast on Thursday.  He added that if the world fails to keep global warming below a 1.5 degrees Celsius increase, “we’re gone.”

In his first day in office as president, Biden moved to rejoin the 2016 Paris Climate Accord, which his predecessor Donald Trump had left.  Earlier this week, several US agencies released reports highlighting the adverse impact that climate change is expected to have on global stability and US national security.

But activists say there is a gap between the administration’s rhetoric and actions.  Kidus Girma, one of the hunger strikers, slammed the president for negotiating with Manchin and Sinema behind closed doors instead of calling them out publicly to back his agenda.  “Why won’t Biden get on air and demand that Joe Manchin start fighting for the people of West Virginia,” Girma told Al Jazeera.

He cited progressive Senator Bernie Sanders’ public push against Manchin, including publishing an op-ed promoting Biden’s social agenda in a West Virginia newspaper.  “Why does Biden hide and cower… Why does he talk to the American public in broad generalities instead of naming who is stopping him?  Because right now he can say it’s Joe Manchin, but mostly it’s him; it’s Biden that’s not fighting hard enough,” Girma said.

Dozens gathered around the hunger strikers at a rally near the White House on Friday to urge the administration to advance its own climate plan.  Asked how he was feeling after three days without food, Girma told Al Jazeera, “hungry and grateful” for those who had come to rally in support on Friday.

Activists say this year has been a turning point in the predicted physical effects of climate change becoming a reality in the United States. Droughts, floods, enormous wildfires, deadly heat waves and hurricanes have struck the country in alarming frequency and intensity.

Julia Paramo, a 24-year-old activist, said her hometown of Dallas is still feeling the “trauma” of the unprecedented cold wave early in 2021 that caused widespread power outages across Texas leading to 210 deaths in the state.  “Us or Exxon,” Paramo had written on her forehead in a message against the fossil fuel industry.  Like other hunger strikers, she was sitting in a wheelchair to conserve her own energy.

She predicted that extreme weather events like the cold wave in Texas will continue.  “It’s only going to get worse, and we don’t have the infrastructure in place to prevent these things from affecting our communities,” Paramo said. “We’re still building back in Dallas.  We’re still going through the trauma that we experienced – this fear that it’s probably going to happen again this winter.”