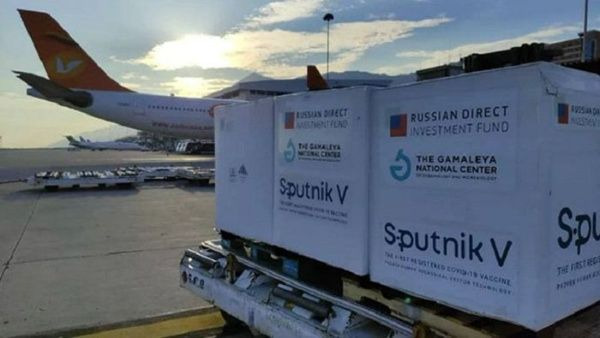 "We have immense cooperation between Russian and Chinese vaccines, so we have already reached 50 percent of vaccination vaccinated and we continue advancing to reach more than 70 percent by the end of the month," asserted Briceño. | Photo: @ViceVenezuela

Caracas, October 24 (RHC)-- Venezuela's vice-presidency reports that the country reached 3.3 million complete vaccines of the Russian vaccine Sputnik V, which represents an advance in the immunization of the population against the Covid-19 pandemic.

The figure is completed after the recent arrival of 822,240 new doses of Sputnik V to Caracas, "in the last month, we have received, 2.1 million of the Russian drug to immunize the population," noted the Vice Minister of Health in Resources, Technology and Regulation, Gerardo Briceño.

"We have an immense cooperation between Russian and Chinese vaccines, so we have already reached 50 percent of vaccinated vaccination and we continue advancing to reach more than 70 percent by the end of the month," Briceño asserted.

The South American country continues to fight against COVID-19, despite the illegal sanctions imposed by the United States (US) and the European Union (EU), which prevent Venezuela from accessing the purchase of raw materials to strengthen its health system.

Recently, President Maduro announced that by January 2022, a plant for the production of the Cuban Abdala vaccine will be created in Venezuela, " the production will be done in a public plant and the projection is in the planning phase", he added.

"The Abdala vaccine is being applied in Venezuela. In the next few days we are going to receive 16 million Abdala vaccines (...) Next Monday we start vaccinating children over 12 years old and onwards, all these issues have been discussed with Cuba. We have a goal of vaccinating 95 percent of the population by December 31", said President Maduro.