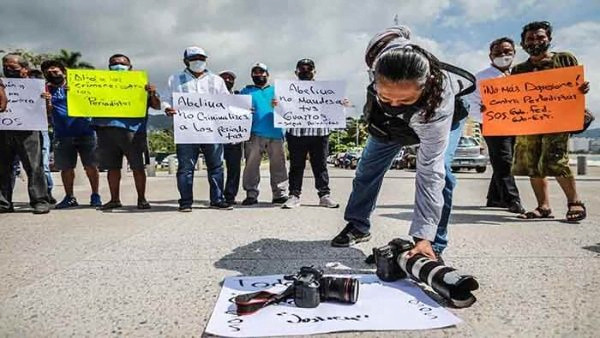 Protest against the murder of a Mexican journalist [File: Carlos Jasso/Reuters]

Mexico City, November 1 (RHC)-- Mexican magazine founder Alfredo Cardoso has died after being shot five times, the Guerrero state governor said, the second journalist to be killed in the country in a week.

Cardoso, a photojournalist from the violent, southwestern state of Guerrero, was gunned down after being abducted from his home on Friday, local media reported.

The Guerrero attorney general’s office said in a statement Cardoso had succumbed to his injuries in hospital on Sunday. It was not immediately clear if the killing of Cardoso was linked to his work in Mexico.

“I wish to express my condolences to the family of journalist Alfredo Cardoso Echeverria, founder of the digital media Las Dos Costas, for their lamentable loss,” Guerrero state leader Evelyn Salgado wrote on social media.

Salgado condemned Cardoso’s murder and said she had instructed the state government secretariat to look after his family through a local initiative set up to protect human rights defenders and journalists.  “I have asked the state attorney general’s office to follow up on the investigations into this incident,” she said.

Cardoso’s death came just days after the killing of veteran journalist Fredy Lopez Arevalo in the southern state of Chiapas.  Reporters Without Borders (Reporters Sans Frontieres, or RSF) regularly ranks Mexico alongside war-torn Syria and Afghanistan as the world’s most dangerous countries for news media.

At least nine journalists have been murdered in Mexico since the start of 2021, local media reported, up from eight journalists last year, although it is unclear if all the killings were linked to their work.

More than 100 reporters have been murdered since 2000 in the country and only a fraction of the crimes have resulted in convictions.