U.S. hypocritically calls for transparent and peaceful elections in Honduras 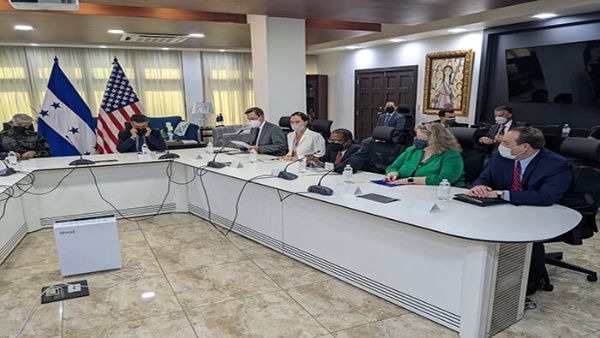 U.S. official Brian Nichols met in the Honduran capital with the foreign minister and other Honduran government officials. | Photo: @WHAAsstSecty

Tegucigalpa, November 23 (RHC)--U.S. Assistant Secretary of State for Western Hemisphere Affairs, Brian Nichols, met on Monday with Honduran officials and asked them to hold a general election on November 28th in an atmosphere of transparency and peace.

"Today in Honduras I spoke of the importance of guaranteeing transparent and peaceful elections," the official wrote on Twitter.

Brian Nichols' request comes in the context of violence and assassinations during the electoral campaign that has left at least thirty politicians dead in the Central American country.

Nichols met in the Honduran capital, Tegucigalpa, with Foreign Minister Lisandro Rosales, the Ministers of Defense, Fredy Díaz, and Security, Julián Pacheco, and the Chief of the Joint Chiefs of Staff of the Armed Forces of Honduras, General Tito Livio Moreno, according to a statement from the Foreign Ministry of the Central American country.

"It is a pleasure to be in Tegucigalpa at a key moment for both countries because it is time to celebrate democracy and to maintain and strengthen our bilateral relationship," Nichols said during the meeting.

The Honduran Foreign Minister thanked Nichols for his visit, to whom he offered details of the preparations for the elections and some actions to guarantee the accompaniment of international observers in the country.

The U.S. official arrived in Honduras to reiterate U.S. support to the democratic institutions of Honduras, which next Sunday will hold general elections to elect the successor of Juan Orlando Hernandez.