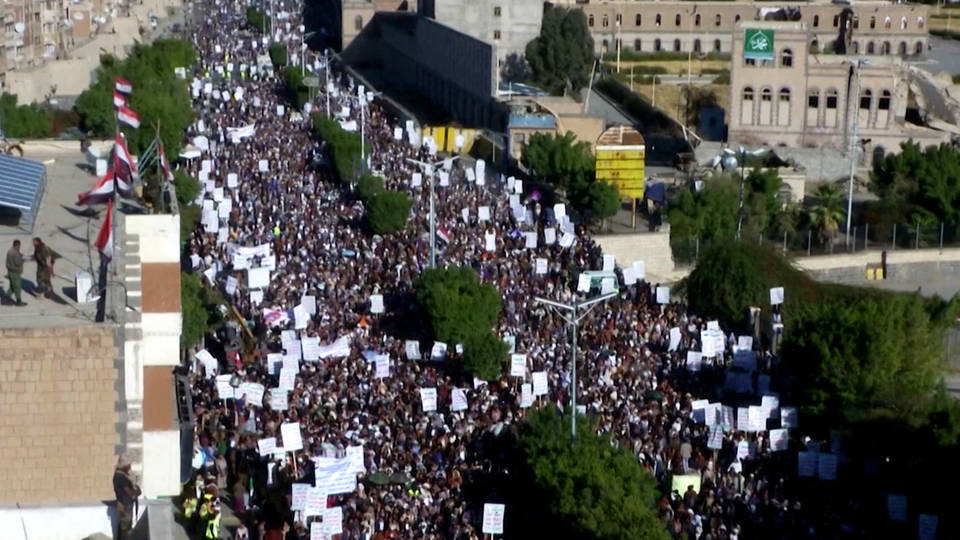 In Yemen, the Saudi-led military coalition has launched air raids on the capital, Sanaa, with reports of massive explosions in the city’s northern neighborhoods.

Sanaa, November 24 (RHC)-- In Yemen, the Saudi-led military coalition has launched air raids on the capital, Sanaa, with reports of massive explosions in the city’s northern neighborhoods.

Saudi officials said they targeted Houthi military sites in retaliation for the rebel group’s drone attacks Saturday on sites in Saudi Arabia, including a major oil hub in Jeddah.

The latest violence comes after thousands of people marched through the streets of Sanaa Monday protesting U.S. support for the Saudi-led military coalition.

Abu Mahran Al-Samawi told reporters: “We the Yemeni people took to the streets today to denounce the military escalation carried out by America, the economic blockade and the continuation of aggression.  We had thought that when Joe Biden took office, he would keep his promises on stopping the war on Yemen, and open the airport in Sanaa.  It turned out that all the talk was a lie.”

In related news, a bipartisan group of senators has introduced a bill that would block the Biden administration’s planned sale of $650 million dollars worth of weapons to Saudi Arabia.
Republicans Rand Paul and Mike Lee joined independent Senator Bernie Sanders as co-sponsors.  In a statement, Senator Paul said, “By participating in this sale, we would not only be rewarding reprehensible behavior, but also exacerbating a humanitarian crisis in Yemen.”

The United Nations warns the Saudi-led invasion of Yemen and naval blockade has led to the worst humanitarian disaster in half a century, with millions displaced and a step away from starvation.