Thousands rally in Baghdad to mark 2020 killing of Iran general 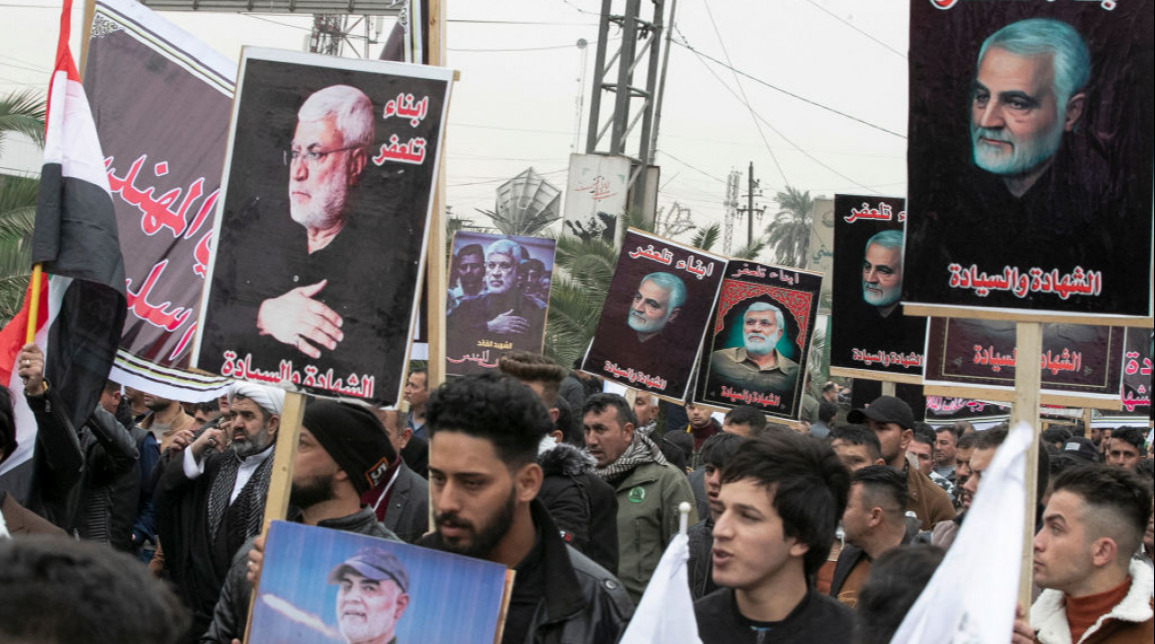 Supporters of al-Hashed al-Shaabi alliance take part in a symbolic funeral and commemoration of the second anniversary of the US raid that killed Qasem Soleimani and Abu Mahdi al-Muhandis, in Baghdad, on January 1, 2022 ​

Baghdad, January 2 (RHC)-- Thousands of people have rallied in the Iraqi capital to mark the second anniversary of the killing of a revered Iranian commander and his Iraqi lieutenant in a drone attack by the United States.

Chanting “Death to America”, the marchers filled a Baghdad square to honor Iran’s General Qassem Soleimani, who headed the Quds Force, the foreign operations arm of the elite Revolutionary Guard, until his death on January 3, 2020.

“US terrorism must end" read one sign at the rally by backers of the pro-Iranian Hashed, also known as the Popular Mobilisation Forces (PMF), a former paramilitary alliance that has been integrated into Iraq’s state security apparatus.

“We will not let you stay after today in the land of the martyrs,” another placard read. US and Israeli flags were strewn on the ground, with people trampling them.

Al Jazeera’s Mahmoud Abdelwahed said the protesters are using the rally as an opportunity to reiterate their demands of full withdrawal of U.S. and foreign troops from Iraq.  “Thousands of protesters, members of Iraq’s Popular Mobilisation Forces were chanting against the US and the presence of US troops in Iraq,” he said, speaking from Baghdad.

“They are blaming the [Iraqi] government for what they consider is collaborating with US forces,” he continued, “and that there hasn’t been any clarity or any transparency in the investigation over the past two years since the killing of General Qassem Soleimani and Abu Mahdi al-Muhandis.”

Supporters of Iran-aligned Shia factions were bussed in from various Iraqi provinces to the rally in Jadriyah, near the headquarters of the powerful armed groups.

Former US President Donald Trump ordered the attack that killed Soleimani near Baghdad’s airport along with his Iraqi lieutenant, Abu Mahdi al-Muhandis, Hashed’s deputy.  Trump had then said the assassination came in response to a wave of attacks on U.S. interests in Iraq.

The killing of Soleimani – the architect of Iran’s Middle Eastern military strategy – and al-Muhandis sent shock waves across the region and sparked fears of a direct military confrontation between decades-old enemies Washington and Tehran.

Days later, Iraq’s parliament passed a non-binding resolution calling for the expulsion of all foreign troops from Iraq.

Iran, which wields considerable influence in neighbouring Iraq, warned it would avenge Soleimani’s death.  Five days after the killing, Iran fired missiles at an air base in Iraq housing US troops and another near Erbil in the north.