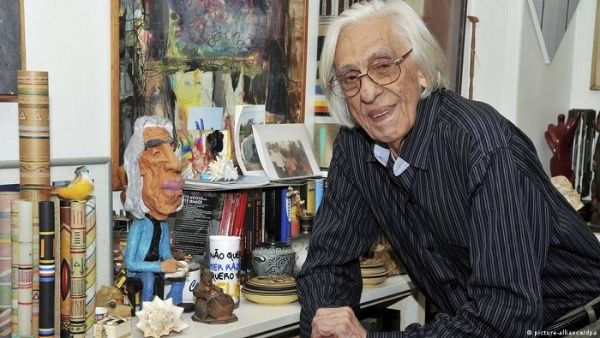 Brasilia, January 14 (RHC)-- The governor of the Brazilian state of Amazonas, Wilson Lima, announced Friday that the illustrious figure of Brazilian literature, the poet Thiago de Mello, has died at the age of 95 at his home in his sleep, for reasons still unknown.

Brazilian literary reference and native of the Amazon region, Thiago de Mello left as a legacy of works translated into more than 30 foreign languages.  Among his most well-known works, "The Statutes of Man" was written in 1977 and is an intellectual heritage that acclaims a favorable relationship between humanity and the natural environment.

"I tried to contribute to the knowledge of the forest with my books.  There are six or seven books only about life in the forest: its legends, its myths, its miracles, its greatness, its miseries as well," emphasized de Mello, in one of his many interviews.

It is worth mentioning that de Mello, who was also a journalist, shares the list of emblematic poets of Latin America with Chilean Pablo Neruda, Mario Benedetti, Jorge Luis Borges and Gabriel García Márquez.

According to news sources in Brazil, the Palacio Rio Negro Cultural Center, in the center of the Amazon municipality of Manaus, will host the funeral procession.