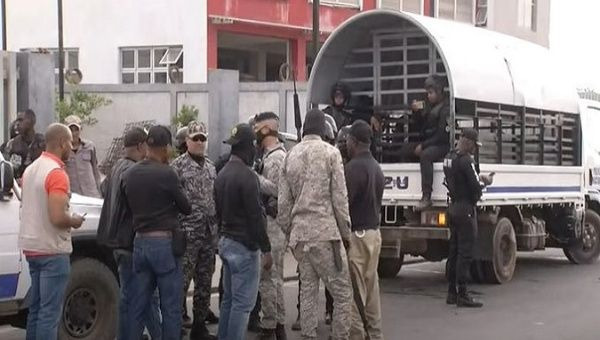 Santo Domingo, May 21 (RHC)-- A total of 385 Haitian nationals were detained in one day this week in the capital city of the Dominican Republic.

The undocumented Haitians were in a housing development in the municipality of Santo Domingo East when they were arrested in a joint operation by police, military and immigration forces.  According to Migration, the people arrested will be subjected to Dominican immigration laws.

"The General Directorate of Migration [DGMRD], in conjunction with the Armed Forces and the National Police, has detained 385 undocumented Haitians during the surprise intervention that began this morning in Juan Bosch," the Dominican state institution reported on the social network Twitter.

The operation was carried out following a day of violence in the capital's residential area when, according to police reports, Haitian migrants threw stones at DGMRD agents.  Official reports indicated that the Migration inspectors were about to verify the legality of the documents of Haitians living there.

DGMRD Director General Enrique Garcia told local media that "unfortunately [on the morning of May 18] these illegals gathered in a gang and attacked with stones, sticks, machetes and other sharp objects a team of the General Directorate of Migration."

The General Directorate of Migration (DGMRD) began an operation this Thursday with the aim of arresting illegal Haitians in the country in the Juan Bosch City of the Santo Domingo province.

Haiti's permanent sociopolitical and economic crisis leads to a constant migratory flow and, being a border country, the Dominican Republic is its main destination.