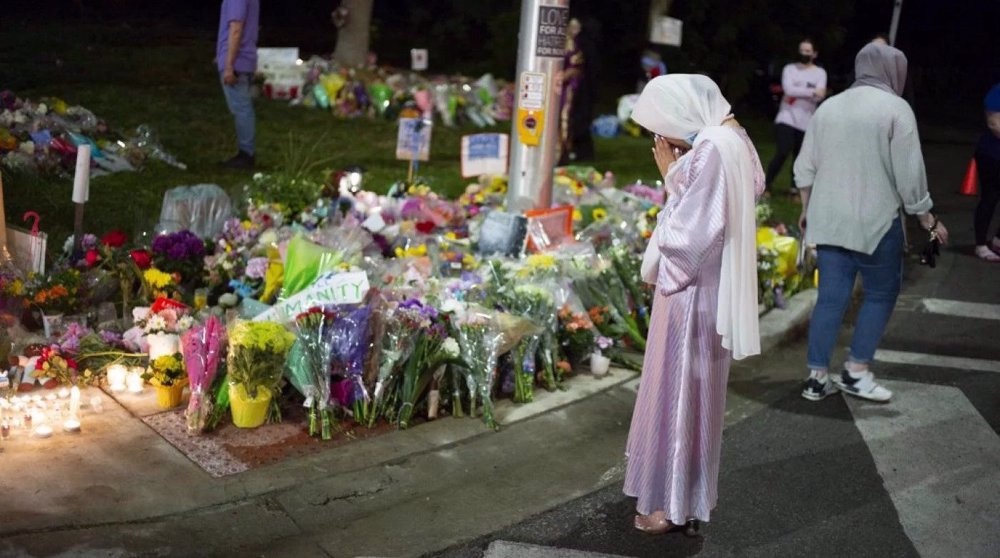 Members of the Muslim community and supporters light candles and place flowers at a memorial on 8 June in London, Canada.  (Photo by AFP)

Ottawa, August 7 (RHC)-- Hate crimes against Muslims across Canada jumped by 71 percent in 2021, according to a newly released report by the government agency Statistics Canada.  Released earlier this week, the study found that the number of recorded attacks against Muslims increased from 84 incidents in 2020 to 144 in 2021.  In 2019, a total of 182 incidents targeting Muslims had been reported.

"We lost Canadian Muslims to hate in 2021.  These numbers also do not tell the whole story - we know that the numbers of hate crimes vastly exceed what show up in hate crime stats," the National Council for Canadian Muslims (NCCM) said on Twitter following the release of the report.

One of the examples of this surge in violence against Muslims in Canada was the killing of four members of a Pakistani-Canadian family in Ontario in June 2021.  The attacker, 20-year-old Nathaniel Veltman, deliberately rammed his pick-up truck into Salman Afzaal, 46, his 77-year-old mother, his wife Madiha, 44, and their 15-year-old daughter Yumna, as they were waiting to cross the street.

Canadian police called the attack "pre-meditated" and an example of hatred against Muslims, while Justin Trudeau described it as a terrorist attack.  "This was a terrorist attack, motivated by hatred, in the heart of one of our communities," Trudeau said at the time. "If anyone thinks racism and hatred don't exist in this country, I want to say this: How do we explain such violence to a child in a hospital? How can we look families in the eye and say "Islamophobia isn't real"?

It wasn't a one-off incident.  Hate crimes against Muslims in Canada grew 253 percent between 2012 and 2015, according to various estimates.  Islamophobic attacks across Canada have increased at an alarming pace. Not only the number of these attacks has increased, but also many of them happen to Muslim women and girls.

Street racism is often inspired by online hate speech and extremism, which has increased in the country.  The 2017 terror attack at a mosque in Québec killed six men after offering their evening prayers. Last year, a caretaker at a Toronto mosque was stabbed to death and the perpetrator was said to have been influenced by neo-Nazi social media posts.

A 2016 Forum Poll revealed that 41 percent of Canadian adults expressed some level of bias against racial groups, with Muslims having the highest negative rating at 28 percent.

Another survey published in 2016, by the Ontario Council of Agencies Serving Immigrants, found that only 32 percent of Ontarians had a “positive impression” of Islam.  Last year, in reports published by NCCM, it was suggested that the federal government take measures to combat Islamophobic actions, including a budget to support families affected by violence against Muslims.