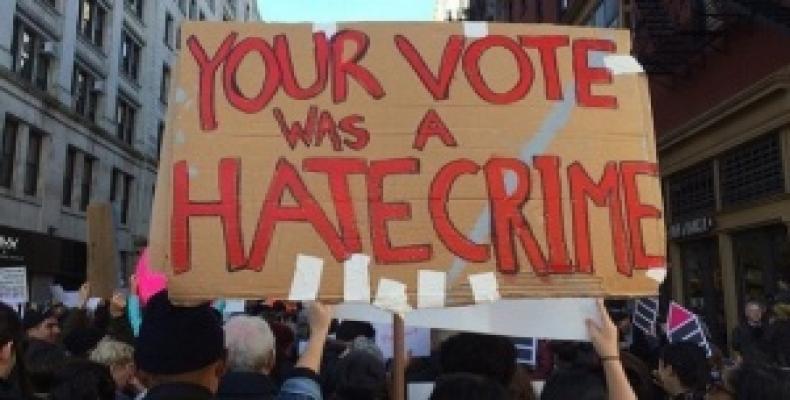 In a video message issued in Washington, Lynch announced that she would review hundreds of alleged hate crimes that were reported after the November 8th vote.

"I know that many Americans are concerned by a spate of recent news reports about alleged hate crimes and harassment.  Some of these incidents have happened in schools.  Others have targeted houses of worship.  And some have singled out individuals for attacks and intimidation.  The FBI is assessing, in conjunction with federal prosecutors, whether particular incidents constitute violations of federal law," she said.

Lynch also described as "sobering" the content of a recent report by the FBI, which stated that hate crimes against Muslims in the U.S .had reached its highest level since the September 11, 2001 attacks.

The bitter face-off between Trump and his Democratic rival Hillary Clinton before the election left the American public divided over many issues including racism and freedom of religion.

Trump's proposals to ban all Muslims from entering the US and to deport illegal immigrants enraged many people, leading to a wave of civil unrest that began during the campaign and continued after his election.

Since the election day, thousands of protesters have held rallies in major U.S. cities like Chicago, New York City, Los Angeles, Boston, calling on the Republican president-elect to step down before his inauguration on January 20.

Lynch, who would reportedly be replaced by Republican Senator Jeff Sessions under Trump, did not address the widespread protests.