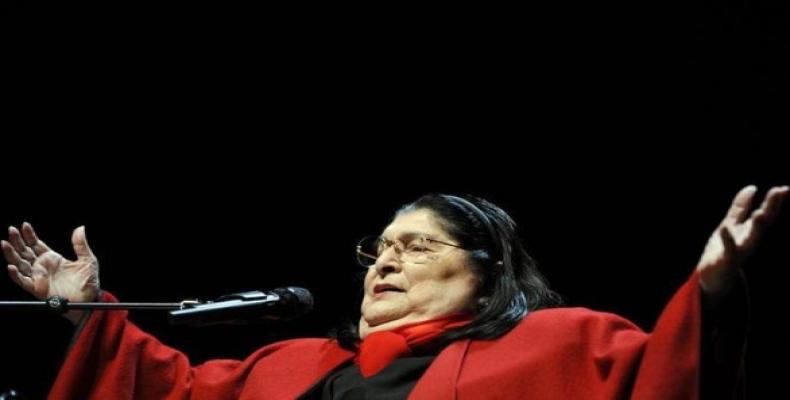 Quito, October 7 (teleSUR-RHC)-- Ecuador’s President Rafael Correa has proposed 'All Voices' by the late Argentinian singer-songwriter Mercedes Sosa as the anthem of the Union of South American Nations (UNASUR). The regional body will move to new headquarters in Quito, Ecuador in December.

Correa believes that the renowned Argentinian poem by Armando Tejada and Cesar Isella, entitled 'Song for All', celebrated through the voice of Sosa, is perfect for the regional organization.

The poem has become one of the most emblematic songs in Latin America and was also adopted as the anthem of the All Voices Festival that brought dozens of musicians together for the first time in Quito in 1996.

The first stanza of the poem reads: “I take a walk along the Cosmic Belt of the South. I stroll through tangled plants of wind and light. On my walk, I feel America’s skin as my skin. In my blood flows a river rushing into my voice.”

“Sun of Peru`s highlands, Bolivia’s face, tin and solitude, a green Brazil, my Chile kisses copper and minerals. I climb from the South to the belly of America that gives rise to a shout destined to grow and explode.”

Sosa, who died October 4, 2009, is considered one of the most outstanding voices of Latin American music and the most representative of Argentinian folk music.

UNASUR was founded in 2008 at the initiative of Venezuelan President Hugo Chávez and its members are Venezuela, Bolivia, Ecuador, Argentina, Uruguay, Paraguay, Surinam, Colombia, Guyana, Chile, Brazil and Peru.