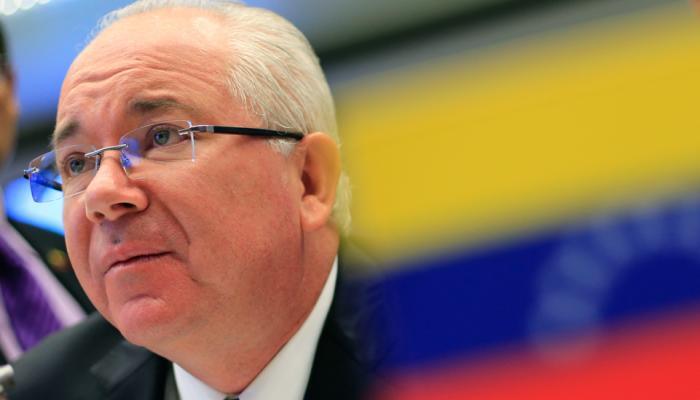 Caracas, December 19 (RHC-teleSUR) -- In an exclusive interview with teleSUR, Venezuelan Foreign Minister Rafael Ramirez said that the U.S. sanctions against Venezuela are “a policy that is destined to fail.”

Interviewed Friday, Ramirez stated that the sanctions imposed by the U.S. will not have the desired effect, that these sanctions “far beyond hurting us, strengthen us” as they call attention to the “true face of U.S. imperialism.”

Ramirez pointed out the contradiction of imposing sanctions on Venezuela at the same as admitting that that sanctions and policies aimed at isolating Cuba have failed. And Venezuela's foreign minister questioned what elements of society U.S. President Obama is caving into by approving these sanctions against Venezuela, speculating that the far right or transnational corporations are behind the push for these sanctions.

He also claimed that the sanctions are ideologically driven, saying: “They want to sanction us because we carry the banner of socialism.” Foreign Minister Ramirez stated that the government of Venezuela intends to denounce the actions of the U.S. government in all forums.

The government of Venezuela has already received support from other countries in the region and regional blocs such as MERCOSUR and ALBA, Ramirez said that he expects UNASUR to also back Venezuela against these sanctions.

Other members of the Venezuelan government have also come out strongly against the sanctions. Venezuela’s National Assembly head Diosdado Cabello slammed the United States Wednesday in an opinion piece published in the New York Times, saying “While Congress accused Venezuela’s government of cracking down on dissent, African-American communities across the United States expressed outrage over police killings of unarmed black men.”

In his New York Times piece, Cabello defended the Venezuelan government’s handling of the opposition violence, arguing authorities responded to the unrest with restraint. “Every effort was made to ensure that only protesters who directly violated laws or placed the lives of others in danger were detained,” he stated.