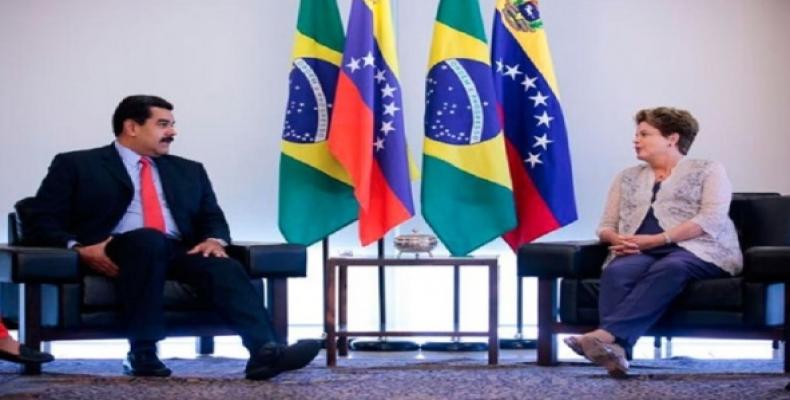 Brasilia, January 3 (teleSUR-RHC)-- The presidents of Venezuela and Brazil, Nicolas Maduro and Dilma Rousseff, respectively, held a meeting in Brasilia on Friday during which they agreed to promote bilateral cooperation between both countries.

The heads of state met at the Planalto Presidential Palace in the Brazilian capital centering their discussions on agriculture and commerce. After the meeting, Maduro told reporters Venezuela and Brazil will increase investment and that Brazil will help Venezuela strengthen its industrial and technological sectors.

Maduro said he discussed the drop of oil prices with Rousseff, and cited his economic plan for 2015. Venezuela is one of the largest exporters of oil in the world and an influential member of the Organization of the Petroleum Exporting Countries (OPEC).

Maduro asserted that he intends to take advantage of the fall in international oil prices to “motivate the whole country” to participate in his economic plan, which is mainly aimed at diversifying the country's source of income and at defeating the “economic war” Venezuela is facing.

Both presidents also agreed to meet every three months as their predecessors, Brazilian Luis Inacio Lula da Silva and Venezuelan Hugo Chavez, had been doing.

Maduro thanked Rousseff for her solidarity against the recently imposed U.S. sanctions on Venezuelan officials. The member states of the Union of South American Nations (UNASUR) also recently condemned U.S. Sanctions on Venezuela were passed by Obama’s administration last month.