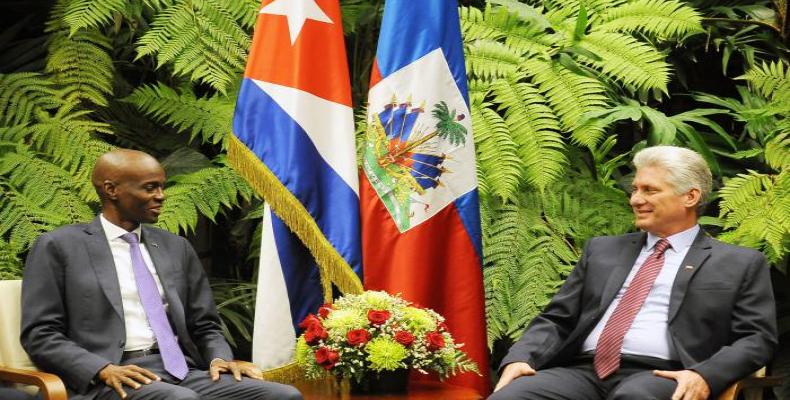 Havana, December 4 (RHC)-- Cuban President Miguel Díaz-Canel received on Monday the President of the Republic of Haiti, His Excellency Jovenel Moïse, who is on an official visit to the island.

In a cordial atmosphere, both leaders reviewed the progress of bilateral relations and highlighted the importance of 20 years of uninterrupted cooperation between the two nations, which began on December 4, 1998 and agreed on the importance of continuing to develop these ties for the benefit of the two peoples. The presidents also discussed different topics on the international agenda.

The Haitian dignitary was accompanied during the meeting with his Cuban counterpart by Bocchit Edmond, Minister of Foreign Affairs and Worship; Grèta Clement Roy, Minister of Public Health and Population; Ardouin Zepherin, Special Adviser; Lesly David, Ambassador of Haiti in Venezuela; Jude Piquant, director of the Office of the Minister of Foreign Affairs and Cults; Guito Edouard, general director of the Directorate of Drinking Water and Sanitation, and Elvire Beauchard, Charge da Affairs of the Embassy of Haiti in Cuba.