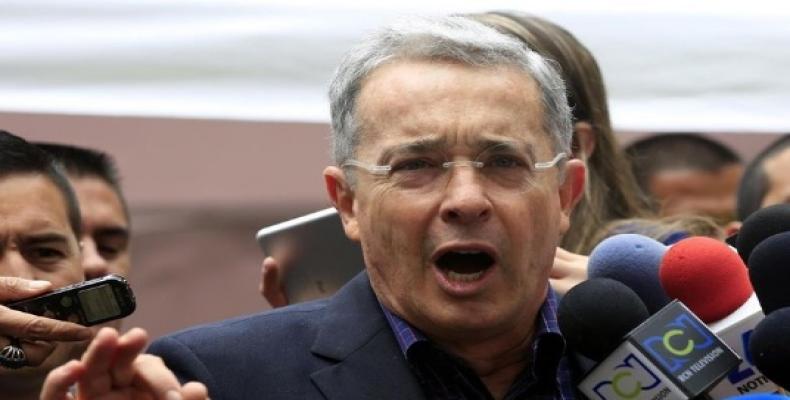 Bogota, April 16 (teleSUR-RHC)-- Colombia's Supreme Court of Justice has named former President Alvaro Uribe as the mastermind behind the bribery scandal that saw three of his former officials found guilty and ordered imprisoned.

The court issued a ruling on Wednesday ordering the detention of former ministers Sabas Pretelt and Diego Palacio, as well as the high-ranking secretary of the presidency, Alberto Velasquez. The three were found guilty of paying bribes to Senators in order to pass a constitutional amendment that would allow Uribe to run for re-election in 2006.

In the statement issued by the court at the time of the ruling, pointed directly at Uribe, saying the guilty parties were “following the instructions of then President Alvaro Uribe Velez” when they bribed lawmakers.

According to Semana magazine, the Supreme Court declined to forward its ruling to other legal bodies in order to investigate Uribe since he is already under investigation for his alleged role in the bribery. The body responsible for that investigation, the Accusation Commission of the Colombian House of Representatives, has been the target of much criticism due to the involvement of some of its members in separate scandals.

Colombian President Juan Manuel Santos recently proposed the dissolution of the Accusation Commission as part of a larger overhaul of the country's judicial system. Santos recommended the overhaul after another corruption scandal involving the former president of the Constitutional Court shook the public's confidence in the judicial system.

The Supreme Court is also expected to issue a ruling regarding Maria del Pilar Hurtado on Friday. Hurtado, another former high-ranking official of President Uribe's government, was found guilty of having conducted illegal wiretaps on politicians, journalists and Supreme Court justices opposed to Uribe.