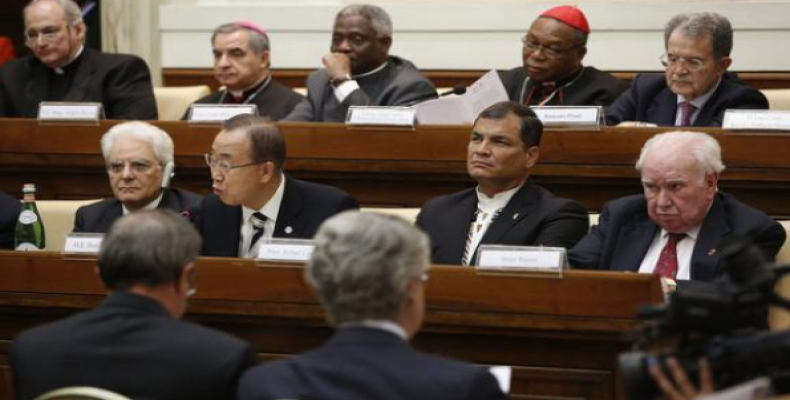 Quito, April 29 (teleSUR-RHC)-- President Rafael Correa presented some of the policies his government implemented in Ecuador to address the challenges of climate change during a conference on Tuesday co-organized by the United Nations at Vatican City.

In the workshop “Protect the Earth, Dignify Humanity,” Correa highlighted the need for “[changing] the productive and energy systems, in order to promote social and economic development in Ecuador.” He mentioned for instance the construction of eight new hydroelectric stations, allowing the production of a cleaner energy avoiding the use of fossil energies. Correa announced that wind turbines and electric “zero-emission” vehicles will soon be set up.

U.N. Secretary-General Ban Ki-moon, also present at the conference, stated that addressing climate change was crucial to tackle extreme poverty and inequality, and guarantee a sustainable and equal economic development. “Climate change is intrinsically linked to public health, water and food security, migration movements, peace and security,” he stated. “This is an ethical matter, of social justice and human rights.”

The summit, entitled: “The Moral Dimensions of Climate Change and Sustainable Development,” was organized by the Pontifical Academy of Sciences and aimed at “[elevating] the importance of the moral dimensions of protecting the environment in advance of the papal encyclical and build a global movement to deal with climate change and sustainable development.”

The U.N. secretary-general also called out climate change skeptics, saying: “Science and religion are not at odds on climate change. Indeed, they are fully aligned. Together, we must clearly communicate that the science of climate change is deep, sound and not in doubt.” Ban also hoped that the Vatican initiative will inspire world leaders to hopefully agree on a framework that will properly address the issue at the upcoming Paris climate talks.

“[The pope's encyclical] will convey to the world that protecting our environment is an urgent moral imperative and a sacred duty for all people of faith and people of conscience,” said Ban.