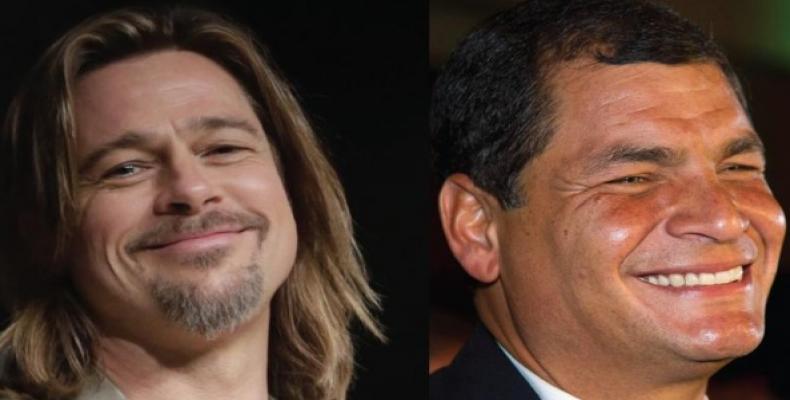 Quito, May 5 (teleSUR-RHC)-- Speaking on his weekly television program, Ecuador’s President Rafael Correa invited U.S. actor Brad Pitt to visit the country to personally witness the legacy of contamination and destruction left by the oil giant in the Ecuadorean rainforest.

News outlets reported in April that Pitt had purchased the movie rights to Paul Barrett's 2014 book “The Law of the Jungle.” The book presents Ecuador's case for justice in a highly unfavorable light. It focuses on a character assassination of U.S. lawyer Steven Donziger, who has relentlessly pursued justice in the case of Chevron's toxic legacy in the Amazon.

“We invite (Brad Pitt) to dip his hand (in the contaminated soil). We'll see if he continues with this movie project, which would be the biggest act of dishonesty,” said President Correa.

Correa also denounced Chevron's campaign to "discredit the Ecuadorean justice system.” The oil company has argued that an Ecuadorean court's ruling, confirmed by the country's Supreme Court, against Chevron was obtained through fraud, an argument also made by Barrett's book.

“Surely Brad Pitt does not know what he is getting involved with, in the complicity he is falling victim to,” said Correa.

Pitt's involvement with this movie project raised some eyebrows as he and his wife, actor Angelina Jolie, are known for supporting humanitarian and environmental causes.

Correa mentioned having met Angelina Jolie and praised her humanitarian work. Jolie, who visited Ecuador on a number of occasions to meet with Colombian refugees as part of her work as a U.N. Goodwill Ambassador, commended the work of the Ecuadorean state in support of refugees. Pitt and Jolie visited Ecuador together in April 2012 and toured areas contaminated by the Chevron oil company. Pitt was even photographed inspecting the contamination near Lago Agrio.