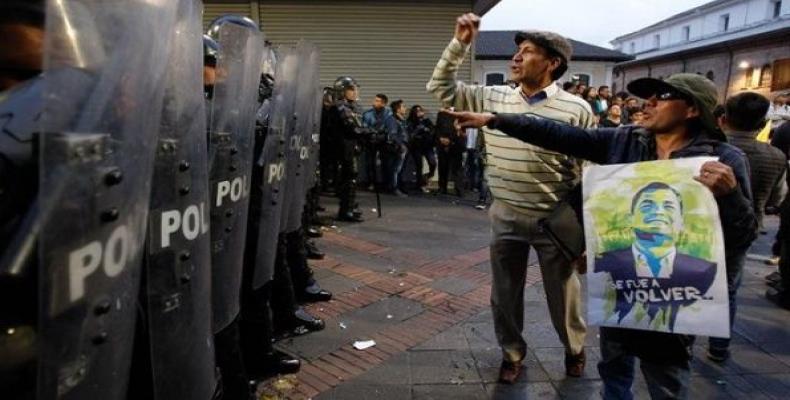 Quito, September 20 (RHC)-- Former Ecuadorean President Rafael Correa’s international lawyer has announced that Interpol has suspended Ecuador’s extradition request against Correa in an “exceptional way” after examining the arguments by his defense.

In an interview with Ecuadorean press, Correa’s lawyer Christophe Marchand explained that there are indications that the legal process in Ecuador violated the former president’s fundamental rights and is not in accordance with international law.  “There is an institutional problem,” Marchand said in reference to the transitory Participation Council which is “placing pressure on the judges overseeing the case.”

In July, an Ecuadorean judge requested that Interpol issue a red notice for the imprisonment and extradition of the former president in relation to the case of an alleged kidnapping of a former opposition legislator, Fernando Balda.

According to Correa’s Ecuadorean lawyer, Caupolican Ochoa, there is no evidence against Correa.  “The general attorney can't take this to trial,” Ochoa told the press.  Correa responded via Twitter asking if maybe the national court feared the presence of international observers.

In Geneva before the United Nations Human Rights Council, on the same day, Ecuador’s former Foreign Affairs Minister Guillaume Long denounced the “collapse of the rule of law” in Ecuador, the illegal intervention in key state institutions, and the dismissal of the Constitutional Court as a part of a strategy to “persecute political opposition.”

“In Ecuador, the Constitutional Court has been dismissed.  Justice and the state’s independent institutions: the General Attorney’s Office, the Judicial Council, the National Electoral Council have been tampered with in violation of the Constitution, in order to persecute members of the political opposition, especially former president Rafael Correa and his government officials,” Long explained.

Long argued that what is happening in Ecuador is not an isolated case but part of a “regional strategy of judicialization of politics, or Lawfare.”  “We ask the Council to call on the Ecuadorean government to protect the rights enshrined in the International Covenant on Civil and Political Rights, to stop political persecutions … We invite the special rapporteur for the independence of judges and lawyers to verify the human rights situation in our country,” Long told the Council.