Ten Days of Mobilizations in Paraguay Against Privatization Bill 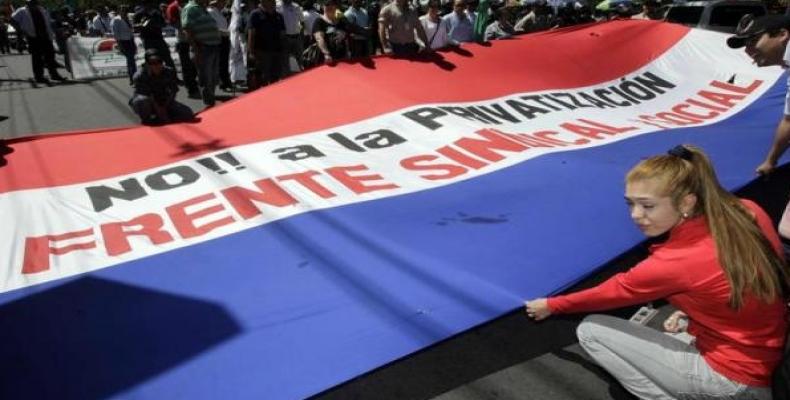 Asunción, May 28 (teleSUR-rhc)-- Thousands of Paraguayan activists and farmers mobilized across the country for the 10th consecutive day on Wednesday, demanding authorities repeal the bill of public-private partnerships (APP).

The APP legislation has received widespread disapproval from public workers and civil society organizations, concerned the law intends to privatize public services including health, and education.

In March 2014, workers launched the country’s first general strike in 20 years demanding greater labor protections, higher wages and a stronger social welfare system. The demonstration was organized by various leaders from the Democratic Congress of the People (CDP), a movement created earlier March consisting of 20 political parties, unions, student and indigenous movements, among others.

The movement aims to be a means to defend the interests of the majority against the government, gathering all the progressive forces of the country. It includes Frente Guasu, the only center-left party that has so far managed to win a presidential election with former priest Fernando Lugo, who was removed from power a year before the end of his presidential term by a parliamentary coup.

One of CDP leaders, Marcial Gomez, said that they met a few senators the day before, requesting that they abrogate the APP bill, arguing it was “weakening” the country's sovereignty, but that the lawmakers seemed reluctant to do so. However demonstrators warned lawmakers that if they did not take into account their demands, they could retaliate with a protest vote (blank or null) during the coming municipal elections in November.

Senators are expected to amend the article 52 of the APP bill on Thursday in a way that will reduce the powers of the executive – a modification supported by the demonstrators, considered as a first step toward the complete abrogation.