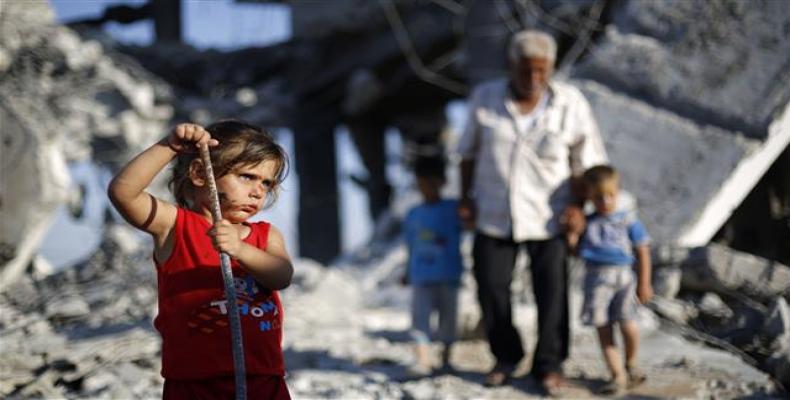 London, July 29 (RHC)-- A new report says that there is substantial evidence that the Israeli regime committed war crimes during a military campaign against the Gaza Strip last year. The existence of such evidence was announced in a joint report by Amnesty International, a London-based rights group, and Forensic Architecture, a research project based at Goldsmiths, the University of London.

The report was prepared based on satellite imagery, eyewitness accounts, videos and photos. The joint report said Israel bombarded residential areas in the southern Gaza Strip city of Rafah between August 1 and 4, 2014 in response to the alleged capture by Palestinian fighters of an Israeli soldier.

“There is strong evidence that Israeli forces committed war crimes in their relentless and massive bombardment of residential areas of Rafah in order to foil the capture of Lieutenant Hadar Goldin, displaying a shocking disregard for civilian lives,” Philip Luther, the director of the Middle East and North Africa Programme at Amnesty International, said in a statement.

The statement added that Israel also carried out a series of “disproportionate” or “indiscriminate” attacks against Palestinians in Rafah. The report also called for an investigation into “compelling evidence of serious violations of international humanitarian law by Israeli forces” in Gaza, adding that at least 135 civilians were killed during the bombardment of Rafah in the above-mentioned four-day period.

Earlier this month, the United Nations Human Rights Council also adopted a resolution calling for those responsible for war crimes during Israel’s devastating military aggression against Gaza to be brought to trial.

Israel launched airstrikes on Gaza in early July 2014 and later expanded its military campaign with a ground invasion of the Palestinian territory. The war ended in late August last year.

More than 2,130 Palestinians lost their lives and some 11,000 were wounded. Gaza Health officials say the victims included 578 children and nearly 260 women.