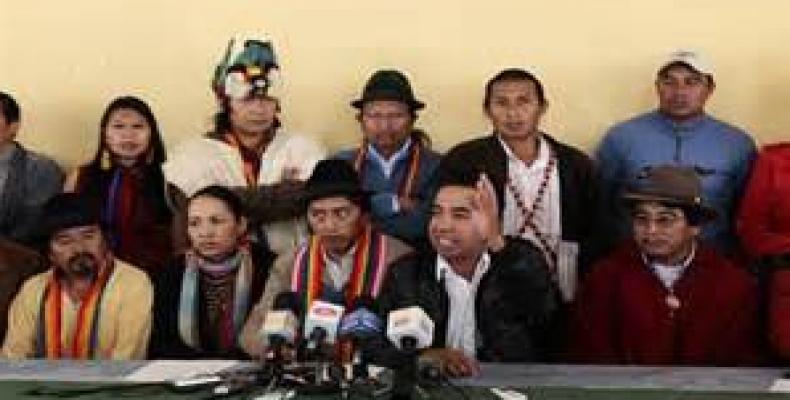 Quito, July 31 (teleSUR-RHC)-- Many in Ecuador’s robust indigenous movement are questioning a call by the Confederation of Indigenous Nationalities of Ecuador, also known as CONAIE, for a national uprising against the government of President Rafael Correa.

CONAIE has rejected a call for dialogue sponsored by the government and have instead have called for an indigenous-led uprising, which will begin with marches on Aug. 2 in the Zamora province and conclude in Quito for an uprising on August 10.

"Everyone needs to know that CONAIE is not the only indigenous voice in the country,” Franklin Columba, leader of the National Confederation of Campesino, Indigenous and Black Organizations (FENOCIN) told teleSUR English on Thursday. “Here there are many organizations that also have their own processes.”

CONAIE’s demands are varied. For many indigenous activists government withdrawal from their land and and a repeal of water laws are essential. Others have joined protests lead by the wealthy right-wing opposition leaders that have rejected of the capital gains bill and inheritance tax proposed by the national government to redistribute wealth.

The organization has taken a hardline to those who question their tactics, saying that they will sanction indigenous leaders who refuse to participate in the August uprising.