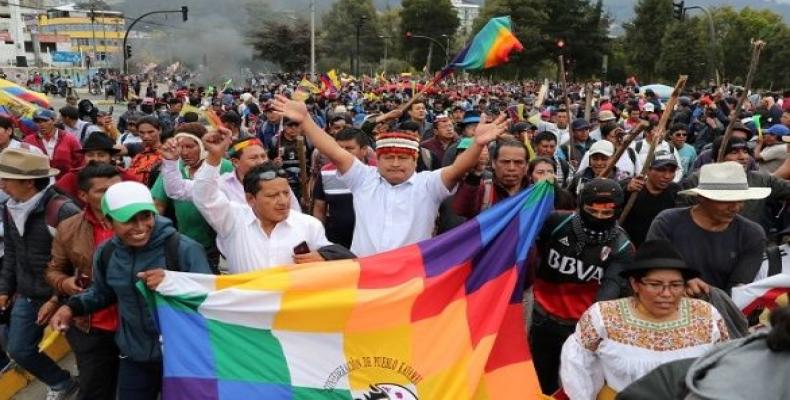 Quito, October 26 (RHC)-- The Confederation of Indigenous Nationalities of Ecuador (Conaie) has called for the formation of a popular parliament so as to outline an economic model and present it to President Lenin Moreno.

"We invite Ecuadorean organizations to join the Peoples and Social Organizations' Parliament to develop a new economic model able to prevent the endorsement of new [policy] packages against the people."

In early October, the indigenous movement staged mass demonstrations against an executive decree that eliminated fuel subsidies.  Together with other labor, budget and tax reforms, the presidential decision was part of the austerity policies which Moreno agreed to implement in order to get an International Monetary Fund (IMF) $4.2 billion loan.

Although the decree was cancelled, the Ecuadorean government's actions left at least eight people dead, 1,300 wounded and more than 1,000 detainees, according to the Ombudsman's Office data.

After agreeing to negotiate with the government, Conaie suspended talks due to persecution undertaken by the Ecuadorean state against social leaders.  The indigenous organization saaid it would maintain contact only with the UN office, demanding that the Moreno administration assume its responsibility for the "excessive use of force" during the protests.

Conaie also announced international legal actions against the Ecuadorean government for the "systematic violation of human rights" and requested the resignation of both Interior Minister Maria Paula Romo and Defense Minister Oswaldo Jarrin.