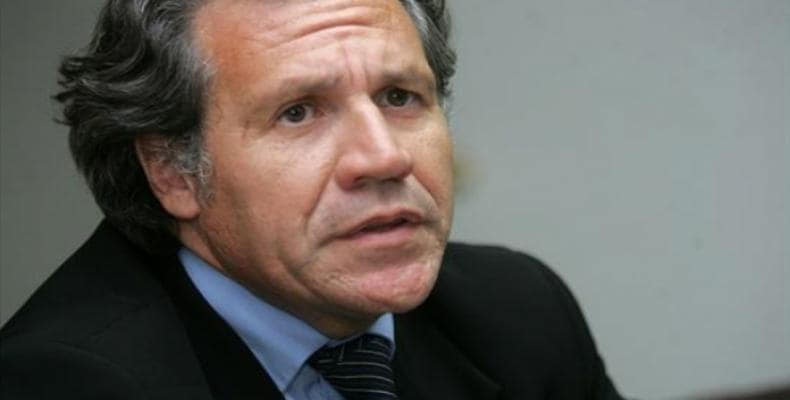 Washington, April 27 (RHC-teleSUR)-- Luis Almagro, secretary-general of the Organization of American States, the OAS, has expressed his "satisfaction" as Venezuela's electoral authorities accepted the right-wing opposition's request to initiate the procedure for a recall referendum against President Nicolas Maduro.

Political analysts noted that with these statements by Almargro, the OAS has once again exposeed itself as a tool to advance Washington's foreign policy objectives in Latin America.

Almagro wrote on Twitter: "Our satisfaction for the positive decision of CNE of #Venezuela," only a few minutes after the National Electoral Council gave the green light for the recall. The United States wields considerable influence over the OAS, with its headquarters in Washington, DC.

A few days earlier, the head of the pro-U.S. regional organization met with a delegation of six opposition lawmakers who complained about various allegations of anti-democratic developments in Venezuela.  They formally asked him to activate the OAS Democratic Charter against Venezuela, as the charter states that "any unconstitutional alteration or interruption of the democratic order" in a state member can justify its suspension from the Washington-based organization.

Ecuador's President Rafael Correa remarked earlier this year that it was time to replace the OAS because of its ideological biases.  "Our perspective is that we hope that CELAC replace the OAS very soon," said Correa about the Community of Latin American and Caribbean States. Unlike the OAS, CELAC does not include the United States and Canada.