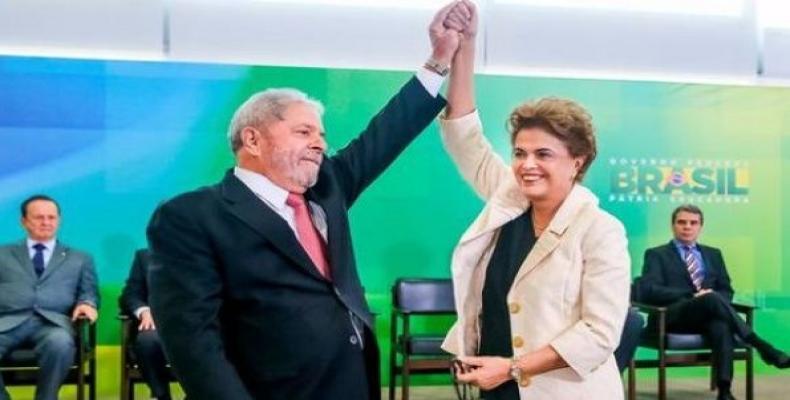 “Lula is innocent and this conviction deeply hurts democracy,” Rousseff said.  Dilma Rousseff is Brazil's most recent constitutionally-elected president, who was removed from power in what many call a parliamentary coup that installed the right-wing current, and unelected president Michel Temer.

She called the sentence a “mockery,” and a “flagrant injustice and a legal absurdity that is an embarrassment to Brazil.”  She said: “Without evidence, Lula, the most popular president in the history of the country and one of the most important global statesmen in the 21st century has suffered full-fledged persecution for years.”

The announcement of Lula's sentence comes as the current unelected president Michel Temer faces mounting evidence of corruption, fueling mass protest calling for his resignation and prosecution.  Temer's approval ratings hover in the single digits.  Lula has also risen as a major potential candidate for the 2018 presidential elections, polling the highest among all possible candidates in preliminary polls.

It was in this context that Rousseff warned of the country's slippage away from democratic rule and into a “state of exception.”  She said: "The country cannot accept this step toward a State of Exception.  The coup's orchestrators attempt to destroy a hero of the Brazilian people. And they will not."

Rousseff also condemned the labor “reform” promoted as a central component of Temer's administration, approved by the Senate earlier this week as being a major loss for Brazil's working class.  “Yesterday, with indignation, we witnessed the Senate approve the end of the CLT (Consolidation of Labor Laws).  This was a monumental loss for Brazilian workers,” she said.

Former President Luiz Inacio Lula da Silva was sentenced on Wednesday to nine years and six months in prison for allegations of being implicated in the Petrobras corruption network.

The ruling could bar him from running for president in the upcoming 2018 elections, despite having the highest approval ratings of all candidates.  A Datafolha poll in April showed that Judge Moro would be tied with Lula in a possible second round of elections.