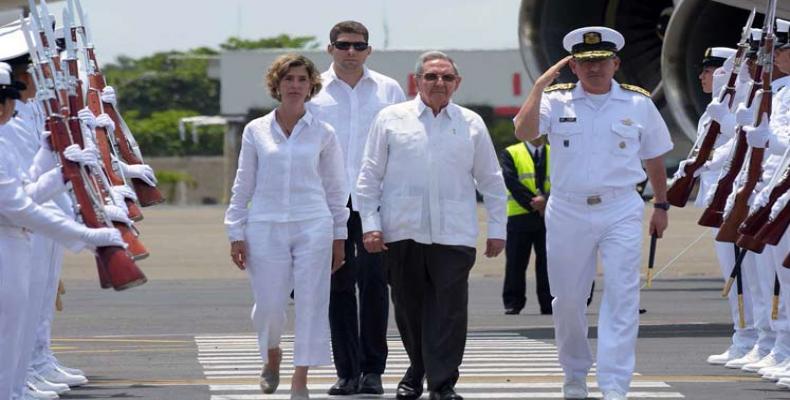 President Raúl was welcomed at the Rafael Núñez airport in Cartagena de Indias by Colombia's Deputy Foreign Minister Patricia Londoño, who said she was honored to welcome Raúl and expressed “infinite gratitude to Cuba for all its efforts, for having hosted the negotiations and talks over the last few years.”

Londoño said: “As President Santos and Foreign Minister Holguín have both said, we, Colombians, can only feel eternal gratitude for Cuba, for all its efforts in support of the Colombia peace process, and specially for hosting the peace talks between the Colombian government and FARC over the past four years.

“These are extremely important days for Colombia and we are proud to be able to count here with the presence of the Cuban leader. I think this is a unique opportunity for him to get to know us, since this is his first visit to our country.”

Accompanying the Cuban president on his Colombia trip are Foreign Minister Bruno Rodríguez Parrilla; Eusebio Leal Spengler, Havana City Historian; and José Luis Ponce Caraballo, ambassador in Colombia; as well as a number of officials from the Ministry, many of whom played important roles fulfilling Cuba's responsibility as a guarantor of the talks.